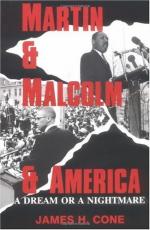 James H. Cone
This Study Guide consists of approximately 27 pages of chapter summaries, quotes, character analysis, themes, and more - everything you need to sharpen your knowledge of Martin & Malcolm & America.

Martin & Malcolm & America: A Dream or a Nightmare Summary & Study Guide includes comprehensive information and analysis to help you understand the book. This study guide contains the following sections:

This detailed literature summary also contains Topics for Discussion and a Free Quiz on Martin & Malcolm & America: A Dream or a Nightmare by James H. Cone.

Martin and Malcolm and America is a study in contrasts between the two great black civil rights leader of the 1960s, Martin Luther King, Jr. and Malcolm X. The author, Cone, a minister during the civil rights era, seeks to show, contrary to the followers of King and Malcolm X, that King and Malcolm X were not polar opposites in their ideas, did not hate one another, and moved towards one another's views before their assassinations. Cone also uses their stories and his interpretations of their philosophies to argue that their ideas are complimentary and must be used by the black community to advance their interests.

The book begins with an introduction that contrasts the ideas of the two figures; Martin Luther King, Jr. believed in the American "Dream" that racial equality could come to America, whereas Malcolm X believed in the American "Nightmare" that the black community had suffered and that Americans could not heal. Martin King believed in the philosophy of integration, with blacks and whites living as one, whereas Malcolm X believed in the philosophy of segregation, with blacks becoming conscious of their racial identity, separating themselves from whites, and promoting their own interests and values. Malcolm X was a believer in Black Nationalism, whereas King rejected such ideas. However, the African-American community contains these two ideas within their culture; many see their ideas and lives as antagonistic, but Cone wants to argue otherwise.

The first eight chapters contrast King's and X's stories. Chapter 1 explains King's early, southern, middle-class Christian upbringing, which Cone argues disposed him to believe in the American Dream. Chapter 2 explains Malcolm X's early, northern, lower class upbringing which alienated him from Christianity and left him in prison. Chapter 3 discusses King's philosophy of racial justice, his conception of the American Dream as one of liberty and equality, and how he put his ideas into practice through the use of nonviolent protest. Chapter 4 discusses Malcolm X's philosophy of racial justice, his conversion to the Nation of Islam, his relationship with Elijah Muhammad, his philosophy of self-love, black supremacy, and devotion to Islam. Chapters 5 and 6 discuss the profound religious influences in the lives of Martin King and Malcolm X, King's from Christianity and Malcolm X's from the Nation of Islam. King's Christianity led him to believe in universal brotherhood and human equality; whereas Malcolm's Muslim theology evolved but always included an anti-Christian, black separatism and friendliness to violent revolution. Chapters 7 and 8 show how towards the end of their lives Malcolm and Martin moved close to one another's views. Chapter 9 weighs the relative merits of both views, showing how they can compliment and correct one another. Chapter 10 criticizes them for not being sufficiently anti-sexist and socialist, and Chapter 11 discusses their continuing legacy in culture, politics, American Christianity, organization strategy and so on. Chapter 12 concludes the book.

More summaries and resources for teaching or studying Martin & Malcolm & America: A Dream or a Nightmare.

Martin & Malcolm & America: A Dream or a Nightmare from BookRags. (c)2022 BookRags, Inc. All rights reserved.