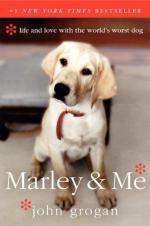 Marley and Me Quotes

John Grogan (journalist)
This Study Guide consists of approximately 32 pages of chapter summaries, quotes, character analysis, themes, and more - everything you need to sharpen your knowledge of Marley and Me.

"His body would quiver, his head would bob from side to side, and his entire rear end would swing in a sort of spastic dance. We called it he Marley Mambo." Chapter 4, pg. 25

"We wouldn't realize it until years later, but he showed early signs of that condition that would later be coined to describe the behavior of thousands of hard-to-control, ants-in-their-pants schoolchildren. Our puppy had a textbook case of attention deficit hyperactivity disorder." Chapter 4, pg. 27

"Our rambunctious, wired dog stood with his shoulders between Jenny's knees, his big, blocky head resting quietly in her lap." Chapter 6, pg. 49

"Ireland was a coast-to-coast No Sex Zone. And that was all the invitation I needed. We spent the trip bopping like bunnies." Chapter 10, pg. 88

"He was a gentle giant around Patrick, and he accepted his...

More summaries and resources for teaching or studying Marley and Me.

Marley and Me from BookRags. (c)2021 BookRags, Inc. All rights reserved.