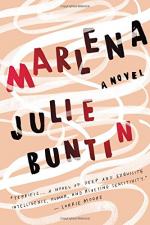 This detailed literature summary also contains Quotes and a Free Quiz on Marlena by Julie Buntin.

The following version of this book was used to create this study guide: Buntin, Julie. Marlena. Henry Holt and Company. New York, NY. 2017. First edition. The story is told in first person, past tense narration: sections of the summary, however, are written in present tense, to reflect the novel’s structural shifting between the present and the past.

The story unfolds along a pair of separate, but interacting, narrative lines. The first, which unfolds in relatively short chapters, is set in the present of narrator and protagonist Cat (Catherine), and takes place in New York. There, Cat works in a library, lives with her husband Liam, and struggles with both alcoholism and a somewhat traumatized past. That past returns to her in the form of text messages and a visit from Sal, the younger brother of Cat’s high-school friend Marlena. As Cat simultaneously prepares for that visit, memories of Marlena (including the violent, somewhat suspicious manner of her death) resurface, intensifying her tendency to deal with her emotional difficulties by consuming large amounts of alcohol.

The New York chapters alternate with longer chapters set in the past, narrating the year in which the increasingly complex, increasingly intense relationship between Cat and Marlena began, developed, and came to an end. That relationship developed in the aftermath of the divorce that resulted in Cat, her other brother Jimmy, and their mother moving to a small, isolated community in Northern Michigan. There, Jimmy got a job in a plastics factory, Cat and Jimmy’s mother got work cleaning houses for wealthy families who have left the area for the winter, and Cat started school, unhappy about the divorce, leaving her friends, and leaving the expensive private school she had been attending.

The family’s house was next to a renovated barn, where Marlena lived with her father and younger brother (Sal). As the more school-oriented Cat and the more free-spirited Marlena developed their somewhat unlikely relationship, Cat discovered (among other things) that Marlena’s father was both addicted to crystal meth and manufactured it; that Marlena had a frequently sexual relationship with the man who supplied her with the pills to which she was addicted; and that her (Cat’s) longing for connection was so strong that it led her to look, almost with hero worship, past all these potentially negative aspects of Marlena’s life and become more and more like her.

Under Marlena’s influence, Cat skipped school, took up smoking, drinking, and drug use, and fell in with a crowd of similarly aimless young people. That crowd included Ryder, Marlena’s ostensible boyfriend, a drug dealer who made his own product and who developed an interest in Cat. Marlena, meanwhile, developed an interest in Jimmy, much to Cat’s dismay. Those relationships, and Cat’s phase of rebelliousness, reached a peak when Cat arranged for her friends to party in the empty home of one of Cat’s mother’s cleaning customers. At the party, Cat had sex with Ryder, and learned from him that he had told the police (who he believes have been closing in on him), about Marlena’s father. Shortly afterwards, Marlena’s father was arrested, and Marlena began a downward spiral that ended with her death, which may or may not have been related to her drug use and/or her relationship with the man who gave her pills.

The novel’s second to last chapter is set in the present. Cat meets with Sal, and in spite of intense cravings, manages to get through the meeting without resorting to alcohol. Shortly afterwards, she resumes her attendance at self-help meetings. The novel’s last chapter describes what Cat calls, in narration, the real ending of her relationship with Marlena, in which Marlena asked Cat to never forget her, no matter what happened in her life. The novel ends with Cat, writing with present-day perspective, that she never did forget – that in fact she wrote it all down.