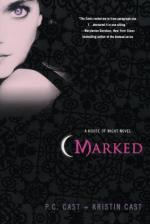 P. C. Cast
This Study Guide consists of approximately 26 pages of chapter summaries, quotes, character analysis, themes, and more - everything you need to sharpen your knowledge of Marked.

This detailed literature summary also contains Topics for Discussion on Marked: A House of Night Novel by P. C. Cast.

Zoey Montgomery is a 16 year old girl that attends Broken Arrow's South Intermediate High School. Zoey has an almost-relationship with football star Heath and is best friends with the fast talking and rarely silent Kayla. Things change for Zoey when she is Marked by a Vampyre Tracker at school. This means that Zoey is going to become a vampyre. Suddenly, Zoey's entire world changes.

Zoey is rejected by her ultra conservative religious mother and step-father (Step-Loser). Zoey runs away to her Grandmother Redbird's lavender farm. Zoey is much more like her grandmother than her mother. Zoey's grandmother is Cherokee. Zoey embodies the Cherokee culture and their beliefs. Zoey is powerful and wise beyond her years.

Although Zoey is a unique girl that rapidly develops vampyre powers and cravings, Zoey is also a teenage girl with all of the usual issues including hatred of tests, fear of being rejected, uncertainty about herself, and the desire to have a nice group of friends as well as a hot boyfriend.

When Zoey enters the House of Night, she changes her name to Zoey Redbird. Zoey must immediately come to terms with the fact that she is different from the other fledgling students and must learn to embrace her emerging powers.

Zoey learns that there are many levels of "fledgling" vampyres. Since she has just been Marked, she is a First Former. The House of Night has six levels of fledglings, ending with Sixth Formers. Each year has their own level of education and skill. Vampyre behaviors do not appear until the fifth or sixth year. However, Zoey feels the cravings almost immediately.

Upon arriving at House of Night, Zoey meets her new mentor, Neferet, the High Priestess at the House of Night. Neferet is a beautiful, tall woman with a commanding presence. Like all adult vamps, Neferet bears her mark as well as an elaborate tattoo on her face that only serves to increase her beauty. Shortly after, Zoey meets Aphrodite, the Leader of a group known as the Dark Daughters and Sons and the High Priestess in training. Zoey and Aphrodite dislike each other immediately. Aphrodite proves to be a mean girl who bullies the others and uses her power to intimidate.

Zoey goes to a ritual of the Dark Daughters and Sons. She knows that she must take over as Aphrodite abuses her power and does not honor the goddess Nyx. Neferet is unaware of Aphrodite's lies and deceit as well as the abuse of power. Zoey enlists the aid of her new friends as well as the aid of Erik Night, the hot boy in school who is also Aphrodite's ex-boyfriend. After a disastrous ritual, Zoey is gifted with great power which allows her to take over the Dark Daughters and Sons and becomes the new High Priestess in training.

More summaries and resources for teaching or studying Marked: A House of Night Novel.