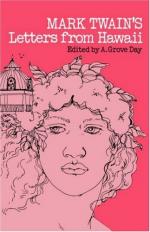 This detailed literature summary also contains Topics for Discussion and a Free Quiz on Mark Twain's Letters from Hawaii by Mark Twain.

Mark Twain writes a series of travel letters from Hawaii, intended for publication in the Sacramento Daily Union. Each chapter corresponds to a single letter written by Mr. Twain between the months of April and November of the year 1866. The first three chapters cover Twain's turbulent voyage to Hawaii, where much of the crew becomes seasick and where the author rails against Balboa for naming the uncooperative ocean "Pacific."

Chapters four through six offer Twain's first impressions of Hawaii, which is largely positive. By the end of chapter six, Twain is a full-fledged tourist, joining equestrian tours of Hawaiian landmarks. After advancing a detailed argument of why San Francisco should join the whaling trade, Twain examins in chapters twelve and thirteen Hawaii's legislature, which he finds to be full of buffoonery.

The longest and most involved chapter is fifteen, which relates the detailed account from the officers and crew who survived the burning of the clipper ship Hornet, and who were forced to endure forty-three days adrift on the open sea. Chapters sixteen and seventeen are dominated by the month-long mourning and subsequent burial of Her Royal Highness the Princess Victoria Kamamalu Kaahumanu, heir presumptive to the crown.

Chapter eighteen begins the final arc of the collection as Twain departs Honolulu for Hawaii to see the great volcano. He arrives at Kealakekua Bay, visiting the site of Captain Cook's murder. In chapter twenty-one Twain digresses to tell the story of Lord George Paulet, the foolish Englishman who briefly usurped control of the Hawaiian Islands, and in chapter twenty-two Twain discusses the Hawaiian god Lono.

Twain spends chapter twenty-three thoroughly examining the Hawaiian sugar trade, comparing local sugar production to comparable plantations in the States. After describing Hawaii's more favorable growing conditions, Twain strongly advocates an American interest in Hawaiian farming, even suggesting that a monopoly might be possible. He advises that Americans should consider Chinese "coolie" labor rather than the more expensive white labor.

Chapter twenty-four details Twain's visit to Hawaii's fabled city of refuge, where he and colleague Mr. Brown find ancient human remains in a nearby cave. Soon after, the two men board a ship for the wet, tropical paradise Waiohinu, where Twain encounters a more primitive sample of natives who still worship the Hawaiian shark god. After hiring an English-speaking guide, he departs on the final leg of his journey.

The collection ends with Twain's visit to the crater of Kilauea, a still-active volcano some three miles in diameter. After sunset, Mark Twain and company marvel at the natural wonder as they look upon an infernal landscape of spitting fire and lava. The ruddy glow of the volcano illuminates the sky for miles in every direction.