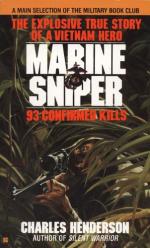 Charles W. Henderson
This Study Guide consists of approximately 37 pages of chapter summaries, quotes, character analysis, themes, and more - everything you need to sharpen your knowledge of Marine Sniper.

This detailed literature summary also contains Topics for Discussion and a Free Quiz on Marine Sniper by Charles W. Henderson.

Carlos Hathcock, the subject of the biography, was born in 1942 and died in 1999. He was a United States Marine Corps sniper with a "service record of 93 confirmed kills and hundreds of probable kills during the Vietnam War." Beyond combat, Hathcock was a championship shooter and a respected instructor in marksmanship and sniper skills. His sniper career ended when he received extensive third-degree burns during a rescue operation. Later in life he suffered from multiple sclerosis.

The biography begins in medias res, and subsequently features a straightforward series of flashbacks to prior periods of time. The flashback sequences provide biographical data about Hathcock's life prior to joining the Marines. There is an appropriate and obvious focus on his skill at, and love for, hunting and the outdoors. An additional area of focus is Hathcock's competitive shooting career, and this is presented in accessible detail with perhaps an over emphasis on the military organizational aspects of competition at the expense of Hathcock's personal involvement. The dominant aspect of the text, however, is a consideration of Hathcock's sniper activities during the Vietnam War. The bulk of material presented considers his initial approximately six month deployment as a sniper during 1966-1967. Several anecdotal scenes are provided which illustrate Hathcock's methodologies and successes.

Most of the situations discussed take place in or around Hill 55, Hathcock's primary base of operations, but the sense of place is poorly developed and the setting devolves to a generic Vietnam landscape. Hathcock lives and operates in close proximity to areas of strong enemy operation and is under daily threat. Significant sniper targets discussed include a woman known as the Apache, an unnamed Frenchman operating as an interrogator for the North Vietnamese, a particularly accomplished enemy sniper known as Nguyan, and a North Vietnamese general. Hathcock is generally most-known for two of these kills—in shooting Nguyan, Hathcock's bullet is said to have penetrated the length of the other sniper's telescopic lens, killing him by entering the brain through the sighting eye; the shooting of the general required a four-day stalk across 1,200 yards of open field under constant observation, culminating in an 800 yard shot.

After his first tour of duty Hathcock returned to the United States and worked briefly in a civilian job before again enlisting and competing in military marksmanship. This was followed by a second deployment to Vietnam where Hathcock was seriously wounded, by being burned extensively. The resultant scar tissue and damage effectively ended his competitive shooting ability. Hathcock spent the next several years as a marksmanship instructor for the Marine Corps before being forced into retirement by multiple sclerosis. After a brief period of depression, Hathcock took up sport fishing.

Marine Sniper from Gale. ©2005-2006 Thomson Gale, a part of the Thomson Corporation. All rights reserved.