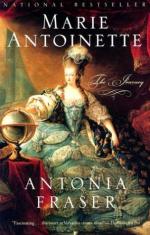 Lady Antonia Fraser
This Study Guide consists of approximately 29 pages of chapter summaries, quotes, character analysis, themes, and more - everything you need to sharpen your knowledge of Marie Antoinette.

This detailed literature summary also contains Topics for Discussion and a Free Quiz on Marie Antoinette: The Journey by Lady Antonia Fraser.

Antoinette is the fifteenth child of the Austrian King and Queen. Her childhood is filled with instruction based on the probability that she is destined for a royal marriage to cement an alliance between countries and families. This happens to be the case when her older sister, pledged in marriage to the Dauphin of France, dies and leaves Antoinette to fill that role. She is soon married by proxy and makes the wedding trip to France, where she meets her young husband. She soon faces a serious problem in her marriage. For months, the marriage remains unconsummated because her husband, Louis, is apathetic about performing his "duty" to produce an heir to the throne. The marriage is eventually consummated to some degree but Antoinette continues to report to her mother that she isn't yet pregnant. Louis, apparently after a heart-to-heart talk with Antoinette's brother, finally completely performs his duty and Antoinette soon conceives.

The first child is a daughter and though there is some despair, there's also hope because it's now proven that Antoinette and Louis are fertile. They have a son soon after, but he is sickly and the entire country continues to worry about him. Another son is eventually born, this one more healthy and easing the country's worry on this front. When another daughter is born, Sophie, the prognosis is dim and the girl lives less than a year. The older son soon grows more ill with what is later diagnosed as spinal tuberculosis. His body is grossly deformed and he is ashamed to be seen by outsiders and later dies.

Prior to the birth of her first child, Antoinette and Louis learn that his grandfather, the king, has fallen ill with smallpox. The king dies, leaving Louis to take the throne with Antoinette as queen. As queen, Antoinette becomes only vaguely interested in the politics of the time. She complains to her brother that she has little influence over the king. She begins an affair with a military man named Fersen that lasts for the coming years. With little to hold her interest, Antoinette looks for other diversions. Early on, she develops a taste for gambling but later gives that up, devoting most of her time to her children and her passion for interior decorating.

The excesses of the lives of the royal family incite the French people to violence. As the common people face serious deprivations, the royalty buy expensive clothes and jewels and participate in elaborate and costly events. This results in an outright revolt in which Louis, Antoinette and their two children are taking captive. They are held for a time and attempt a single escape but that effort is thwarted. Eventually, Louis is taken to court to answer for his crimes and his execution is ordered.

Antoinette goes into mourning for her loss but spends all her time trying to better the situation for her children. She has limited success though both outlive her. She is soon sentenced to beheading herself and dies at the guillotine. Her surviving son dies at age ten of the same disease that had taken his brother's life. The sole survivor, Antoinette's daughter, lives to age seventy-two and recalls those tumultuous years prior to her mother's death.

More summaries and resources for teaching or studying Marie Antoinette: The Journey.