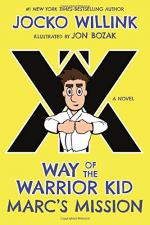 Jocko Willink
This Study Guide consists of approximately 44 pages of chapter summaries, quotes, character analysis, themes, and more - everything you need to sharpen your knowledge of Marc's Mission.

Marc is a sixth-grade student who learned important lessons about hard work and discipline the previous summer. Now he discovers that he has more lessons to learn. Marc believes his summer is going to be ruined for several reasons. First, he is going to have to attend summer camp. Next, his bicycle has become a rusted pile of junk. Finally, a boy in his class teases him to the point that Marc loses control. The novel opens with Jake at the principal's office because Marc has lost his temper with Nathan James. Nathan called Marc Plate Face, and Marc threw something at Nathan that struck both Nathan and the teacher. When the principal calls Marc's house, Uncle Jake answers the phone. When Jake arrives to pick Marc up, his first instruction is to make Marc apologize to both Nathan and his teacher.

Marc pours out his worries to Jake. and Jake assures Marc there is a cure for every one of his problems. To Marc's surprise, Jake says Marc's attitude is the solution to every problem. As was the case the previous summer, Marc agrees to follow Jake's directions to work through each of the problems. He does not know what this will entail, but he trusts Jake and knows that he will follow through.

One of Marc's problems is that he wants a new bicycle, but his mother has refused because his old bike is only two years old and Marc has not taken care of it. Marc believes Jake is going to buy him a new bicycle, but Jake says Marc needs to earn the money himself. He shows Marc how to take the bicycle apart. Then, he helps Marc get a mowing service started so he can earn money to buy what he needs to fix his bike. Mark mows lawns, pulls weeds, and even cleans bird poo from a patio. He paints each piece of his bicycle, puts on new tires, and realizes he does not need a new bicycle.

Marc also realizes he can have fun at summer camp, though Nathan continues to make Marc's life miserable. Jake teaches Marc some coping techniques and challenges Marc to find out more about Nathan. Marc discovers that Nathan's family is very poor and that Nathan basically begs for food every afternoon after camp. That information makes Marc more compassionate. He realizes that he has to find a way to lead Nathan into a better attitude rather than fighting him. Marc finds a way to make friends. Marc then works out a deal so that Nathan can attend jiu-jitsu class. Marc also buys an old bicycle that he and Nathan can fix up together. By the time the project is finished, Nathan has begun to show interest in being a Warrior Kid like Marc.

Marc faces another challenge. His jiu-jitsu coach wants him to compete that summer. Marc is scared of losing, but with the help of Jake and a fellow jiu-jitsu student, Marc learns that he could win but he will certainly learn from the competition, even if he loses. Marc learns other lessons over the summer, including that a day off from all work does not make him feel better and that he has developed the capacity to be a leader, though he did not realize when it happened.

More summaries and resources for teaching or studying Marc's Mission.