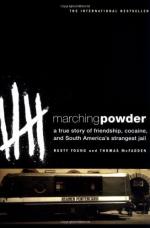 Thomas L. McFadden
This Study Guide consists of approximately 32 pages of chapter summaries, quotes, character analysis, themes, and more - everything you need to sharpen your knowledge of Marching Powder.

San Pedro Prison is the setting for most of the book's events. Thomas is sent there after being busted for cocaine trafficking. The prison's amazing rules, living arrangements, and system of criminalized capitalism become central to the story.

La Paz is the Bolivian city that contains San Pedro Prison. When Rusty arrives there early in the book, he describes it as a high-altitude, cold city whose narrow streets are lined with multi-story buildings and blocked with traffic.

El Alto Airport is in La Paz. This is the airport from which Thomas tries to smuggle cocaine overseas, only to be double-crossed by his accomplice, Colonel Lanza, and imprisoned.

FELCN is a Spanish acronym of the Bolivian federal police's special unit against drug trafficking. After Thomas is arrested, he is incarcerated by Colonel Lanza for 11 days in FELCN's jail, under terrible...