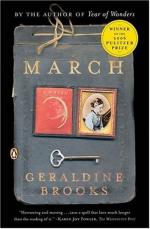 Related Topics
The Secret Chord
People of the Book
Horse: A Novel

Geraldine Brooks
This Study Guide consists of approximately 46 pages of chapter summaries, quotes, character analysis, themes, and more - everything you need to sharpen your knowledge of March.

March is the story of Captain March, the father of the infamous March daughters from Louisa May Alcott's classic novel Little Women, as he battles through the Civil War doing all he can to hold tightly to his morals while war ravages the country.

At the opening of the novel, the reader learns that March is serving as a Union chaplain during the Civil War. In the opening scene, March is trying to save the life of a young injured soldier who has fallen into some water and cannot swim. The boy panics and in a horrendous act to save his own life, March pushes the boy away from him, to certain death in the raging river. This boy, Silas Stone, will be the first of many ghosts to haunt March throughout the novel. As March progresses through the various Civil War battles, he often contemplates his past and how he got to where he is now. As a teenager, he first began making his fortune selling from door to door. During one such business outing, March befriends a wealthy landowner, Mr. Clement, and falls in love with Clement's best slave, Grace. At Grace's request, March begins teaching Clement's slave children how to read. When Clement finds out, he banishes March from his property and has Grace publicly whipped. The image of leaving Grace, the women he loved, tied up and bloody in Clement's backyard fills March with guilt for the rest of his life. As an adult, however, he meets and marries the fiery and intelligent Marmee Day and soon fathers four precocious daughters.

Throughout his adult life, March is a strong supporter of the abolitionist movement, and he opens up his home to the Underground Railroad helping hide runaway slaves. He financially supports famed abolitionist John Brown and loses his entire fortune to the cause. When the Civil War breaks out, March knows that he cannot sit idly at home while younger men give up their lives for the cause March has helped champion: setting slaves free. With his wife's blessing, March packs up his belongings and prepared to serve the Union Army as a chaplain. His first post is short-lived as he is reunited with Grace, now twenty years later, at Clement's old estate. When the two are caught reconciling their affection, March is reassigned to work with freed slaves - known as "contraband" - at a cotton plantation where the slaves are being paid wages for their work. March is hired by plantation owner Ethan Canning to teach the workers how to read and write. March loves his job on the plantation and forms many relationships with the freed slaves, particularly the children. There are many freed slaves, however, who do not like the idea of their fellow slaves continuing work on the plantations, even if it is for pay, and they form guerrilla gangs to raid the plantations, stealing whatever they can get their hands on and even kidnapping freed slaves to sell back into slavery for a profit.

During March's second year on Canning's plantation, Oak Landing, a rebel attack like this takes place. March is terrified and disgusted with himself for hiding to save his own life rather than confronting the rebels to save the lives of others. March is overwhelmed with guilt as freed slaves he had come to love are slaughtered around him. By the grace of one slave woman, Zannah, March's life is spared and he is sent to a Washington hospital to recover from his injuries. March is reunited with his wife there but refuses to come home with her. He feels he must atone for the grief that he has caused. He needs to justify the deaths of those slave children, even if it means abandoning his own children for redemption. In the end, however, March is forced to return home. In the bleak ending of the novel, March realizes that ghosts will forever haunt his life.

More summaries and resources for teaching or studying March.