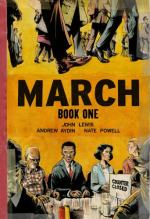 In frame one on page 74, the mother thanks Lewis for spending time with them. In frame two, she thumps both boys on the back of the head, prompting them to thank him in frame three. In frame four, there are muted conversations around the room as everyone prepares to leave for the inauguration.

In the first frames of page 75, Lewis again greets his sister, Rosa. A man steps into the picture and gives Lewis a message from Jim Lawson, which prompts Lewis to remember the past.

Frame four reverts to March 26, 1958. Lewis is attending the First Baptist Church in Nashville where a fellow student says that Jim Lawson will be speaking that evening on nonviolence. On page 76, there are only a few who attend and Lewis is the only student from his school. Diane Nash, a student at Frisk University, is there. Lawson...