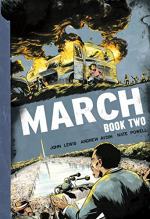 The book is presented in the form of a graphic novel, but it is a biography. The author, John Lewis, is a congressman when Barack Obama is sworn in as the first black president of the United States. That event serves as the backdrop for all the work Lewis and others do as protestors during the Civil Rights Movements during the 1960s. The book is the second of a three-part series but can be read as a stand-alone book.

This book covers two major events during the Civil Rights Movement – the Freedom Rides and the march on Washington, D.C. In most cases, the organizers of the Civil Rights Movement chose specific laws and rules they wanted to change, and then set out with a specific plan to change those. This is true in the case of the Freedom Rides. The courts had ruled that segregation on buses was illegal, but bus lines and drivers were still enforcing the rule that said blacks had to ride at the rear of the bus. The Freedom Rides were organized to force bus lines to obey the court's ruling.

Young men and women ride the buses, sitting without regard to the previous segregation rules. They are polite but firm in their refusal to segregate and for blacks to sit only at the back. Their protests gather supporters but also prompt opposition. Some of that opposition is violent and many are injured. Police are often at the heart of the problem, participating in the attacks or turning their backs when peaceful protestors are attacked.

The Freedom Rides turn especially violent when a bus is firebombed and others are jailed. Some moderate organizers want to put a stop to the Freedom Rides at that point, but others want to keep the momentum going, despite the risk. The rides continue, even when many face jail time or physical violence. Eventually, drivers refuse to work, fearing they will be injured in altercations. The process is long and arduous, but eventually prompts change.

The other major event – the march on Washington, D.C. – begins to gather interest though white politicians try to stop it. Lewis initially participates despite his fear that it will become a nonevent. Though there are some problems, including that the Big Six leaders wind up in the middle of the march instead of at the front of the crowd. There are no major problems and the march seems to be a success. However, just weeks later, a Birmingham church is firebombed during a youth rally, showing that racial prejudice is continuing, especially in the South.