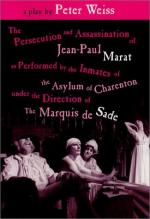 Peter Weiss
This Study Guide consists of approximately 22 pages of chapter summaries, quotes, character analysis, themes, and more - everything you need to sharpen your knowledge of Marat / Sade.

“Marat/Sade” by Peter Weiss is an examination of narrative authority, human nature, identity, the exercise of power within the social hierarchy, and the ambiguity of meaning. The story is told as a play within a play, so that the actual audience is presented with a depiction of another audience watching a play performed within the famous Charenton lunatic asylum, founded in 1645 in Charenton-Saint-Maurice, France. The play, written by the Marquis de Sade, an inmate at Charenton, focuses on the life and death of Jean-Paul Marat through an examination and narrative of the events of the French Revolution. The performance, which is the play’s main event, takes place on July 13, 1808, after the Revolution and during the reign of Napoleon. The narrative of Sade’s play takes place in mid 1793 during the Revolution, ending with the assassination of Jean-Paul Marat on July 13, 1793.

The multiplicity of narratives and voices in the play creates a destabilizing force that undermines the concept of ultimate truth. The audience constantly has to discern between Sade’s play and Weiss’s play, taking into account their different characterizations. Elements of Sade’s play include historical events, so it is unclear if the incidents he depicts are accurate, or if he has taken artistic license with them. Marat voices the ideologies of the French Revolution in the play, which rely totally on the concepts of essentialist truth. However, in the descriptions of the Revolution included in the play it is revealed that the revolutionaries, in ridding their country of the upper classes, have also turned on one another. On several occasions, the patients of the hospital chant at Marat to give them their revolution and their freedom now. The fact that the revolutionaries did not see an immediate change in their circumstances and society led them to turn on one another. However, Marat advocates this cleansing of the revolutionary forces. Clearly the motivating forces of the Revolution, which claim to be equality, brotherhood, and freedom, are not of as much concern as power and money. The ideologies of the Revolution, therefore, are themselves undermined.

The Director of Charenton, Coulmier, objects to the performance whenever he thinks that the ideologies of the Revolution are being advocated by Sade or when he believes the current political structure is being insulted or threatened. Coulmier insists that men are far more civilized, enlightened, and advanced than they were during the time of the Revolution. However, Coulmier’s assertions are totally undermined when, at the end of the play, he participates along with everyone else in a battle that serves as a reenactment of the Revolution.

While the philosophy of Sade is closely aligned with the kind of moral and textual ambiguity developed in the play, even his ideas are undermined. Sade’s belief in anarchistic nihilism and the elevating nature of pain are never fully supported or endorsed. The narrative of his play and his speeches are often interrupted by physical altercations or the distracting interjections of the inmates. The inmates of the asylum are also the play’s actors and the nurses and supervisors are constantly being forced to step in and restrain them when they suddenly lose control of their faculties. . Weiss’s stage directions suggest that the inmates constantly develop a chaotic background to the dialogue by hopping around or rolling or fighting or performing some kind of odd and unexplained action. Marat, Coulmier, and Sade believe in the ultimately spiritual nature of man, although their conceptions of this nature vary. At one point it seems as if Sade attempts to reach a higher realm of understanding and expression; he orders one of the female inmates to brutally whip him as he relates the events of the Revolution to the present circumstances. However, even this idea of the primacy of spirituality in the nature of man is undermined by the physicality of the inmates and the physical illnesses or corruptions that affect each of the characters of the play. Marat is affected by a degenerative skin disease which makes him appear deformed and he spends almost the entire play in his bath. The destabilization of reality and essential truth throughout the text reveals to the audience the complications of human nature and history. By the end of the play, , Weiss successfully conveys the idea that there is no simple or wholly favorable solution to the failings and temptations of human nature.

More summaries and resources for teaching or studying Marat / Sade.