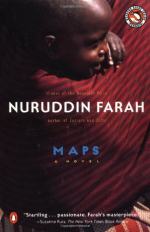 Nuruddin Farah
This Study Guide consists of approximately 30 pages of chapter summaries, quotes, character analysis, themes, and more - everything you need to sharpen your knowledge of Maps.

This detailed literature summary also contains Quotes and a Free Quiz on Maps by Nuruddin Farah.

The following version of this book was used to create this study guide: Farah, Nuruddin. Maps. New York: Arcade Publishing, 2016.

The entirety of the novel takes place in Somalia, and it is structured as a retrospective of 18-year-old Askar as he looks back upon his youth and childhood. Askar was born in the small Somalian village of Kallafo. His father died fighting Ethiopian invasion as a member of the Western Somalia Liberation Front, and Askar’s mother died giving birth to him. Askar was raised for the first eight years of his life by Misra, a woman who lives in Kallafo but who is originally from a northern territory closer to Ethiopia. Misra and Askar lived in a hut owned by Askar’s uncle Qorrax, whom Askar did not like. Qorrax was generally brutish and ruthless. Askar loved Misra very much and viewed her as his mother.

Misra had a sexual relationship with a local Muslim priest named Aw-Adan. Once, Misra became pregnant, and Aw-Adan helped her to abort the fetus. Karin, an elderly woman in the village, sometimes helped take care of Askar. One day, her sickly husband died, and she allowed Askar to see the body. Askar attended the local Koranic school, where Aw-Adan was the teacher, and although Askar did not like Aw-Adan, he studied hard in response to Misra’s encouragement. He became interested in maps and received a globe as a present from Misra.

One day, as the Ethiopian military advanced further into Somalia, they attacked Kallafo with artillery shells. Misra and Askar were unscathed, but it was decided that Askar should live in Mogadiscio, the capital city, with his uncle Hilaal and his aunt Salaado. He traveled on his own to Mogaddiscio by bus; he was eight years old. In Mogadiscio, he met Hilaal and Salaado, who were refined and highly educated. Askar liked them but had some difficulty acclimating to his new surroundings. Hilaal and Salaado educated Askar regarding the history and sociopolitics of the Somali people.

Askar often wrote letters to Misra, and he occasionally returned to Kallafo to visit. Eventually, the Ethiopians won a decisive military victory and took control of the Ogaden territory. A large influx of Somali refugees subsequently arrived in Mogadiscio. Askar did not want to be thought of as a refugee, but he technically was one. Askar decided that he wanted to help fight back against Ethiopian occupation when he was an adult. A few days later, Misra arrived in Mogadiscio. She had been falsely accused of being a traitor, as she is technically a foreigner. She was attacked and raped. Hilaal and Salaado allowed her to reside in their home.

Misra was later diagnosed with a malignant tumor in her left breast, and she underwent surgery to have it removed. While she was recovering in the hospital, three unidentified assailants kidnapped her from the hospital. A few days later, her body was found. She had been murdered. By he end of the novel, Askar in 18 years old, and he struggles to decide between enrolling in a university and joining the Somali military.

More summaries and resources for teaching or studying Maps.