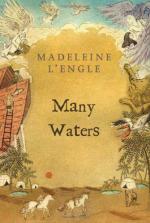 Madeleine L'Engle
This Study Guide consists of approximately 23 pages of chapter summaries, quotes, character analysis, themes, and more - everything you need to sharpen your knowledge of Many Waters.

Many Waters Summary & Study Guide includes comprehensive information and analysis to help you understand the book. This study guide contains the following sections:

This detailed literature summary also contains Topics for Discussion on Many Waters by Madeleine L'Engle.

"Many Waters" by Madeleine L'Engle tells the story of teenage twin brothers, Dennys and Sandy. The boys don't realize there is an experiment in progress in the lab. They are transported to a new place and era and they must figure out how to get back to their home and time.

Dennys and Sandy are ready for some warmth as a break from the cold March storm. In their mother's lab, they dream of warmth and type their wish to go somewhere warm and sparsely populated onto the computer. When they leave the room, they find themselves in a desert where they are found by a four-foot man named Japheth and a small mastadon.

The boys are overheated and Japheth takes them to his grandfather for healing. To do this, they ride on the backs of unicorns, but Dennys finds himself in a different destination. Sandy comes to consciousness in Japheth's grandfather's tent. The others promise to help him find his brother. As he waits he learns about cherubim, nephilim and giants. He also meets Grandfather Lamech's granddaughter Yalith. After a series of events, Dennys returns. He is now in Noah's tents, and the women in Yalith's family determine to protect him and help him heal since he was mistreated while he was gone. Sandy is still across the desert getting cared for in Lamech's tent. Lamech and Noah won't talk to each other even though they are father and son.

Both boys get stronger and find a place in this strange world. Dennys learns that he can understand the stars, and Sandy helps Lamech in the garden. With encouragement on all sides, Noah and Lamech let go of old hostilities and reconcile. Meanwhile, the nephilim reject the seraphim and make a plan to tempt the twins with Tiglah's beauty.

The twins begin to realize that they are part of the biblical story of the flood. This is the Noah who built the ark. Both Lamech and Noah know that changes are coming. A being named El tells Lamech that Noah and his family will be saved from the waters. Lamech doesn't know what that means. Sandy and Dennys wonder how they are gong to get home, and they are also concerned about Yalith since they didn't remember her name from the Bible story. Sandy is questioning the events that he described previously when he is kidnapped.

As Noah's family mourns Lamech, they realize that Sandy is missing. They bury the old man then set out to find Sandy, but the nehpilim have hidden him well. Sandy realizes he can escape if he can summon a unicorn, but first he has to truly believe in it. When the unicorn comes to him, Japheth and the mammoth find him. The family is reunited.

The boys stay to help Noah and the family build the ark. When it is nearly complete, the rain begins to fall and the seraphim help the twins get back to their home using unicorns and a quantum leap.

More summaries and resources for teaching or studying Many Waters.

Many Waters from BookRags. (c)2022 BookRags, Inc. All rights reserved.