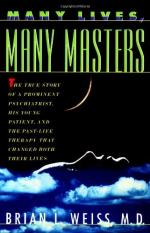 Many Lives, Many Masters Summary & Study Guide includes comprehensive information and analysis to help you understand the book. This study guide contains the following sections:

This detailed literature summary also contains Topics for Discussion and a Free Quiz on Many Lives, Many Masters by Brian L. Weiss.

Many Lives, Many Masters by Brian L. Weiss, M.D. relates the author's discovery of past life therapy in the course of treating a young psychiatric patient named Catherine. Weiss taps into Catherine's past lives through hypnosis. In first-person voice, Weiss recounts hypnotic sessions during which Catherine vividly details cultures, geography and centuries she has not experienced, learned or imagined in her waking state.

Catherine is a twenty-seven-year-old technician at a Miami University hospital where Weiss heads as chief of psychiatry. Mutual friends encourage her to make an appointment with Weiss. When she comes to his office, a range of phobias plague her and Weiss describes her as emotionally depressed.

At various stages Weiss provides details of his background. He is married with two children and has had academic and professional success since childhood. He preludes the remarkable events that compelled him to write this book citing accomplishments as a Magna Cum Laude graduate of Columbia University, a Medical Degree from Yale, faculty position at the University of Pittsburgh amongst diverse credentials. He calls to attention his years of disciplined training and experience. He is a traditional scientist who follows the rigid conservative methods of his profession. Greater personal content is revealed as his and Catherine's lives become spiritually connected.

This association is discovered when Weiss resorts to hypnosis. Their first hypnotic session reveals an alcoholic father who touched Catherine inappropriately. Unlike most patients who make such discoveries, her symptoms increase rather than decrease. Frustrated by lack of success, Weiss guides Catherine, still under hypnotic trance, to go to the source of her troubles. After 18 months of repressing childhood memories, Catherine describes an unfamiliar setting, in which her name is Aronda.

Her perplexing memories lead to sixteen chapters delineating hypnotic sessions of an extra-sensory nature. At each appointment, Weiss regresses Catherine back to what he begins to identify as past lives. Her accounts unearth scarring traumas of poverty, pain, hardship, and violent death that branch with repercussion into her present life. One incarnation involves a drowning. In another, she is a soldier whose throat is slashed. Under trance, Catherine reports being of the male gender and varies in race and nationality. She recognizes people in her present life playing other roles, including Weiss, as her teacher in an ancient time. After each regression, the doctor observes Catherine's outlook brightening. Each session dissipates a different phobia or fear. As she becomes confident and energetic, Weiss resolves to get to the bottom of every one of her anxieties via this method.

During Catherine's treatment, Weiss becomes an unexpected participant and beneficiary. The past life regressions lead to paranormal communications that support concepts of reincarnation as well as an afterlife. Not only are Catherine's hypnotic regressions curing her, but Weiss is forced to question his years of traditional training. The turning point occurs during an "in-between lives state." Catherine continues to speak during trance, when a sophisticated voice, which differs from Catherine's usual whisper, conveys philosophical lessons. In this state, while her soul rests, other entities address Weiss. The state of being in-between lives fascinates Weiss. "The Masters" speak from what they define as a different plane. The Masters reflect a wisdom beyond Catherine's experience and nature. They tell Weiss that he can heal others by eradicating fear as he is doing for Catherine. The phenomena, which Catherine details after a past life has ended, compels Weiss to pursue the in-between lives state.

A noteworthy aspect of Catherine's conveyance is the consistency that occurs after each lifetime ends. Regardless of how violent or painless her death, she reports rising above her body and being drawn to "a white energizing light." The Masters explain that the soul enters a state of rest, before reincarnating again. Through Catherine, they reveal the purpose for incarnating, comparing it to a child progressing through grade school and how learning lessons of human kindness results in spiritual advancement. Failing to learn sends the soul back to the physical state until it learns its lessons. The Masters, of whom there are several, reveal to Weiss, that the ultimate purpose of these lessons is to heal others using past life therapy.

One of the Master tells him (through Catherine) that his father and son are there. The Master describes his son's fatal heart ailment and Weiss is stunned. What the Masters say verifies the authenticity of the revelations. His first baby died of a heart deformity. Weiss guarantees Catherine could not know his personal life details. Out of trance, Catherine has no memory of "after death" conversations. The idea of listening to the tapes of the "in-between" scares her. Weiss does not force the issue, realizing it may undo the good that has been done. The Masters advise that the material is for his ears, not Catherine's.

Catherine's psyche heals rapidly. She shows no trace of anxiety by the book's end. The Masters continue their lessons through revelatory dreams. Weiss alludes to using past life therapy on patients when symptoms warrant it. He concludes the book with the thought that "life is more than meets the eye." He emphasizes how science must pay heed to this phenomena. He calls out to the psychiatric community to keep an open mind. Lastly, he highlights how the messages received through Catherine exhort charity, faith, hope, love, and respect for self and others as well as nature. These virtues are the core of most religious teachings.

Many Lives, Many Masters from BookRags. (c)2022 BookRags, Inc. All rights reserved.