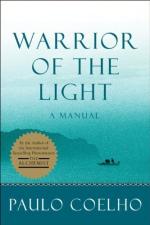 Manual of the Warrior of Light Summary & Study Guide

Paulo Coelho
This Study Guide consists of approximately 29 pages of chapter summaries, quotes, character analysis, themes, and more - everything you need to sharpen your knowledge of Manual of the Warrior of Light.

Manual of the Warrior of Light Summary & Study Guide Description

Manual of the Warrior of Light Summary & Study Guide includes comprehensive information and analysis to help you understand the book. This study guide contains the following sections:

This detailed literature summary also contains Topics for Discussion and a Free Quiz on Manual of the Warrior of Light by Paulo Coelho.

The Warrior of the Light is an enlightening, philosophical book about a young boy's path through spiritual battle. At the beginning of the book, the boy is talking to a woman, who tells him the story of an island with a temple. The temple has many bells, and she tells him it is worth his while to go to the edge of the village and listen for them. He does as the mysterious woman tells him to do but does not hear a thing. He asks a fisherman in the village about the island, and he tells the boy there had been a temple on the island, but an earthquake made the building collapse. Even though the island is no longer visible from the village's shore, the people can sometime still hear the bells when the wind whistles through the island. The boy becomes obsessed with hearing the bells and loses interest in school, his friends, and family. People tease him for wanting so desperately to hear the bells, yet he never gives up faith that he will hear them one day.

Six months after having talked to the mysterious woman, the boy was still waiting to hear the bells. Fishermen passed by, insisting they had heard them, hoping it would give him a bit of a reprieve. Then one day, a fisherman tells him perhaps it is only fishermen who can hear the bells, and with that, the boy decides he will study to become a fisherman so that one day he can hear the bells. He looks around and at the ocean, more calm and relieved that he can return to play with his friends. He knew he had not wasted time, and that one day he would be able to hear the bells when he was grown and would become a fisherman. He could hear the sea again, the seagulls, and the wind that rustled through the palm trees. It had been more than six months since he had heard these sounds because he was so obsessed with listening for the bells. When finally he heard the voices of his dear friends, he also heard the first bell ring, then another, until all the bells were ringing in the drowned temple.

He did not have to grow up to hear the bells after all. Years later, he went back home to that same beach. He was no longer obsessed with the bells and thinks perhaps it was his imagination that he had heard the bells. Still, he decided to try to listen for them among the cry of the seagulls, just to see if he could. To his surprise, he saw the mysterious woman from his childhood. She has not changed or aged a bit. He asks her what she is doing at the beach. She hands him a blue notebook and tells him to write about being a Warrior of the Light. These are the pages that he has written.

More summaries and resources for teaching or studying Manual of the Warrior of Light.

Manual of the Warrior of Light from BookRags. (c)2022 BookRags, Inc. All rights reserved.