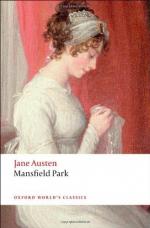 This detailed literature summary also contains Topics for Discussion and a Free Quiz on Mansfield Park by Jane Austen.

Fanny Price is the eldest daughter in a large family of small means. When she is nine years old, she is sent to live with her wealthier relations in the country, the Bertram family and her Aunt Norris. Fanny is a very timid child and feels very inferior around her four cousins, Julia, Maria, Edmund, and Tom. Julia and Maria are just slightly older than Fanny, but they never include her or help her feel a part of the household. Tom is much older than Fanny and just tolerates her, but Edmund becomes Fanny's friend and benefactor, helping her with her education and making sure she is looked after when the rest of the family neglects her. Fanny stays in touch with her older brother William, but she hardly ever gets to see him.

Lady Bertram and Mrs. Norris come to depend on Fanny, but they usually treat her like a maidservant rather than a relative. As the children become young adults, they are introduced to another family on the property, the Crawfords. Mrs. Norris has helped arrange a match for Maria with a very wealthy, very ignorant man named Mr. Rushforth, and Maria enters into the engagement because she longs for his wealth. Henry Crawford is a charismatic young man, and Julia and Maria Bertram both fall in love with him. Fanny sees the impropriety of Maria and Henry's flirtations and is wary of the Crawfords.

Edmund falls in love with Henry's sister Mary, even though they don't have much in common. Edmund is determined to become a clergyman, and Mary is very ambitious and wishes that Edmund were to inherit Mansfield Park, but Edmund is the younger brother and will only inherit a living. During a bout of bad weather, Tom brings home a friend named Mr. Yates, and Mr. Yates proposes that the young people put on a play. They decide on a play called Lovers' Vows, and Maria and Henry Crawford form one of the couples in the pay while Mary and Edmund form the other. Fanny refuses to join the play because she knows her uncle, who is out of the country on business, would never approve of it.

Sir Thomas Bertram returns from his trip early, and the play is broken up. Soon thereafter, Maria marries Mr. Rushworth and Julia goes to stay with her sister and brother-in-law. Henry Crawford then decides to try and make Fanny fall in love with him, but in so doing, he falls in love with her. He proposes to her, and she refuses him, bringing the wrath of her uncle and aunts on her. They see Henry as a very advantageous match for a girl who has no money, for he is very well off, but Fanny understands his character and will not give in.

In an effort to get his niece to understand the folly of her ways, Sir Bertram sends Fanny to her native home in Portsmouth for several months. While she is there she misses the comforts and tranquility of Mansfield Park immensely, and she even begins to feel that she might be able to tolerate Mr. Crawford when he comes to her and treats her so kindly and gently. But then Mr. Crawford and Maria run away together, causing a scandal that is in all the newspapers. Mary Crawford's reaction to these events shows Edmund her true colors, and he is heartbroken, knowing he can never marry her now. Julia elopes to Scotland with Mr. Yates. Fanny and her younger sister Susan return to Mansfield Park. In the end, Fanny marries Edmund and Susan becomes Lady Bertram's companion. Maria and Mr. Crawford separate, and Mrs. Norris and Maria go to live in another country to escape the scorn.