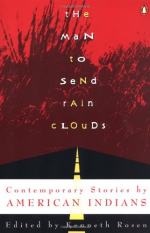 Yellow Woman and the Beauty of the Spirit: Essays on Native American Life Today (1996) is a collection of Silko's essays.

The Pueblo Indians, Joe S. Sando's 1976 book on the history of the Pueblo, enhances the reader's understanding of the Pueblo community.

Redefining American Literary History (1990), edited by A. LaVonne Brown Ruoff and Jerry W. Ward, Jr., provides a context for the study of Native American literature in the United States.

House of Many Rooms, Robin White's 1958 novel, chronicles the story of an American missionary in India. There Christians still follow Hindu customs, to the bewilderment of the missionary— who finally accepts their choices. This work provides an interesting thematic parallel to "The Man to Send Rain Clouds."