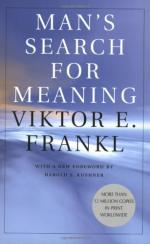 Viktor Frankl
This Study Guide consists of approximately 40 pages of chapter summaries, quotes, character analysis, themes, and more - everything you need to sharpen your knowledge of Man's Search for Meaning.

This detailed literature summary also contains Topics for Discussion and a Free Quiz on Man's Search for Meaning by Viktor Frankl.

The main goal of this book is to provide perspective and techniques for a person to use to find meaning in his or her life. It is written in an autobiographical style by psychiatrist, Viktor Frankl. He discusses many specific examples from his imprisonment in a Nazi concentration camp, along with his professional knowledge to offer a method for discovering personal fulfillment and a sense of meaning in life. With descriptive language, Frankl creates a vivid image of this horrible ordeal. He begins the book by describing his reactions and observations at the outset of his imprisonment.

Specifically, he details the conditions of the concentration camp and defines specific terms. He tells the reader that facts are presented only as they are part of man's experience, which provides the basis for understanding the psychology of individuals who face extreme suffering. Frankl tells the story of his and others' suffering in order to provide a first hand account of the thoughts and behaviors a person goes through when confronted with such misery. He writes in a style that reflects the mindset of the individual prisoner, specifically the common and unknown person. Based on his imprisonment and his training in Psychiatry, Frankl identifies three significant periods for a prisoner: following admission into the camp; when well entrenched in camp routine; and following release and liberation.

While discussing experiences in the concentration camp, a great deal of attention is given to this first psychological phase characterized by shock. Here it is noted that Frankl and nearly every member imprisoned with him experienced the "delusion of reprieve" - a psychiatric term referring to the state of mind of condemned men who intensely hold to the notion that they will be reprieved immediately before execution. Even though he and other prisoners saw many sent to the gas chambers and watched others die from malnourishment, lack of medical care, and frequent torture, there was still a prevailing thought that they would somehow be saved. When reality began to eliminate the delusion of reprieve, suicide was common thought of nearly everyone given the brutality and hopelessness of situation. At this point, shock was replaced by the second phase of psychological reaction, apathy, as a necessary way of coping with the constant abuse.

Frankl writes that joy and suffering are relative concepts, with meaning determined by individuals in reference to their experiences and expectations. Similarly, he mentions that people have the ability to choose what will become of them mentally and spiritually.

Due to this ability of individuals to make such psychological choices, meaning can be found even in grave circumstances. Conversely, Frankl provides examples that show how people who lost hope could not find meaning in the suffering of the concentration camp, and ultimately gave in to death. The biggest source of psychological stress was of the unknown, particularly how long the imprisonment and abuse might be, as dates of relief were never provided. A man who was not able to envision the end to these circumstances was not able to aim at an ultimate goal in life. People with this mindset were often prone to unravel internally. Frankl relates this to the plight of the unemployed worker who becomes depressed with his or her condition, continuing to limit the ability to get a job.

In discussing the psychological progression of prisoners, Frankl turns his discussion to what he refers to as the third phase, which occurs with release from the concentration camps. With this new and somewhat unexpected liberation, a difficult psychological condition is presented. Freedom is an almost dreamlike state of mind that is difficult to grasp. This is illustrated as the men timidly walk beyond the boundaries that had formerly held them prisoner, almost anticipating to be beaten for leaving the camp. Phase 2 had been so pronounced that the prisoners were now having a difficult time feeling pleased to be released. They had to relearn how to experience this emotion that had been deadened by repeated exposure to atrocities and suffering.

After discussing the liberation of the concentration camp prisoners, Frankl begins the second section of this book, Logotherapy in a Nutshell. Here he outlines a theory of Logotherapy as a psychological technique for helping people. In this section, Frankl discusses the basics of this approach to therapy and supports it by referring to some work with patients and again his own experiences in the concentration camps. The writing is less an autobiographical account and more a detailed presentation of psychological terms and concepts associated with logotherapy. Through an examination of logotherapy, Frankl contrasts its approach with traditional psychoanalysis and emphasizes it is the only form of therapy that can help people with their search for meaning. The meaning of life can be discovered in three ways. First, one can perform a deed. Second, one can experience something or encounter someone. Or thirdly, one can demonstrate a certain attitude toward suffering. Concepts of existential frustration, noogenic neuroses, and life's transitoriness are addressed in terms of their relative impact on a person's search for and perception of meaning.

This section focuses on how the human mind naturally processes life events and how logotherapy can be proactively used as a way to integrate psychological concepts to create a framework for discovering meaning. Logotherapy regards responsibility as the essence of existence, meaning that a person needs to determine his or her own meaning of life by answering this question in terms of individual wants and needs. Essential concepts to Logotherapy are "hyper-intention" and "hyper-reflection." Hyper-intention is the idea that trying to force something will make it impossible to achieve, and hyper-reflection is the idea that too much focus on a particular thought or behavior will lead to unhealthy outcomes. Logotherapy bases its therapeutic technique on the notion of "paradoxical intention," which is a method of focusing on unwanted circumstances as a means of utilizing hyper-intention and hyper-reflection to produce one's actual objective.

The final section, "The Case for a Tragic Optimism," makes the case that people will benefit from an optimistic perspective of life no matter what their hardships. According to logotherapy, meaning is a tangible down to earth concept. Frankl reiterates the three ways for people to arrive at meaning: accomplishing something, experiencing something or encountering someone, or turning a personal tragedy into triumph. It is noted that the third way is the most important avenue to meaning. Suicide often occurs when people find a lack of hope and meaning in their lives, Frankl discusses how to use logotherapy to help suicidal individuals find a sense of purpose even in their suffering. Tragic optimism is the concept that a person is naturally optimistic even in the face of extremely negative circumstances. In logotherapy, this is represented with the "tragic triad" which consists of pain, guilt and death. He concludes the book by emphasizing the benefits of tragic optimism in managing the difficult moments in life, but more importantly as a means of finding the true meaning of one's existence.

More summaries and resources for teaching or studying Man's Search for Meaning.