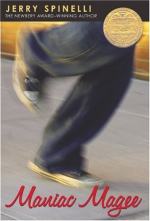 Jerry Spinelli
This Study Guide consists of approximately 30 pages of chapter summaries, quotes, character analysis, themes, and more - everything you need to sharpen your knowledge of Maniac Magee.

Maniac Magee by Jerry Spinelli is a young adult novel published in 1990. The novel received critical acclaim (upon release) and in 1991 won the prestigious Newbery Medal. Maniac Magee is the story of Jeffery Lionel Magee, a homeless drifter who finds his way to the racially divided community of Two Mills, Pennsylvania. Upon arrival, Maniac amazes the town with his feats of athleticism and bravery and is soon deemed a legend. While creating a name for himself, Maniac meets the Beale family who bring him into their home amidst racial criticism. Although ensuing racial tensions force Maniac to leave the Beale’s household, a series of relationships and events unite Two Mills and Maniac with his newfound family.

Jeffery Lionel Magee aka “Maniac Magee” is an orphan whose parents died in a trolley accident when he was three. Without a home, he moves in with his aunt and uncle who dislike each other to the point of not communicating. While living with them, Maniac runs away during a school musical never to return. After a year, he mysteriously shows up in Two Mills. The town is racially divided with white people living in the West End of town and black people living in the East End of town.

While walking in the East End on his first day in town, Maniac meets a girl named Amanda Beale carrying a suitcase. Mistaking her for a runaway, Maniac approaches Amanda and discovers she is carrying her prized collection of used books. Although Amanda loves her books and is protective of them, she reluctantly allows Maniac to have one.

Maniac continues making a scene around town every step of the way. Maniac catches a football pass and punts it back during a high school gym class. Then, he breaks the pitching streak of burly John McNab at the little league field. Next, Maniac saves a boy caught in the backyard of the mysterious Finsterwald house. After a day of antics, it’s safe to say the legend has begun.

Later, as Maniac is walking around the East End neighborhood, he meets Mars Bar Thompson, the neighborhood’s bully. Mars questions why Maniac is in the neighborhood and steals Amanda’s book. Maniac desperately tries to retrieve the book and is unsuccessful. In the middle of the scene, Amanda shows up and scolds Mars while demanding he return the book. She brings Maniac into her home where he is introduced to the Beale family. Amanda’s family consists of her mother, father, and unruly brother and sister. After it is discovered Maniac is homeless, Amanda’s family welcomes the orphan into their home. Maniac loves his new family but soon discovers the neighborhood isn’t as welcoming as the Beales are.

After a run in with a bitter old gentleman and a racial slur being painted on the Beale home, Maniac decides he must move out. In one last attempt to earn the good wishes of the community, Maniac unties the infamous Cobble’s Knot. The Cobble’s Knot has been tangled for years and the town rejoices in Maniac’s feat. In the middle of the celebration, Amanda realizes the falling confetti is made from one of her precious books. Maniac takes this incident as the final straw and moves out of the Beale’s home.

With no place to go, Maniac begins living in the buffalo pen at the zoo. A maintenance worker named Grayson discovers Maniac one evening while making his rounds. Grayson, a former minor league baseball player, looks after Maniac and helps him find an empty baseball closet to live in. In return, Maniac provides companionship and helps Grayson learn to read. The two develop a very close bond, but after celebrating the holidays together Grayson dies.

Depressed and freezing, Maniac goes to a Valley Forge historical site to wither away. One morning, he discovers two children are also living at the site. The two boys, Piper and Russell, have run away to escape school and their chaotic home life. Maniac, sensing someone must be looking for the boys, tricks them into going back home. When they return to Two Mills, Maniac soon discovers the boys are the brothers of John McNab, the pitcher. The McNab home is dirty and in a state of utter chaos. In addition, the family is preparing for what they believe to be an impending East End rebellion. For the sake of Piper and Russell, Maniac lives in the McNab home. All the while, Maniac attempts to keep the two young boys under control and keep them in school.

During the time Maniac lives with the McNabs, he talks Mars into coming to a McNab birthday party. The party ends in disaster and Maniac virtually gives up hope for an East End/West End reconciliation.

After the party debacle, Maniac moves back to the zoo and continues to live his typical nomadic lifestyle. While running one morning, he realizes that Mars is following him. This continues until one day an hysterical Piper McNab approaches the two boys. Maniac and Mars follow Piper to a train trestle where Russell is trapped and fearful of an approaching train. Maniac, remembering the tragic accident that killed his parents, blacks out and leaves the scene.

Two days later, Maniac finds Mars in the buffalo pen where he is sleeping. He questions why Maniac fled the scene at the train trestle. Mars also informs Maniac he saved Russell that day. After Mars saves Russell, the McNab boys befriend him and go to his East End home for the evening. The town of Two Mills has taken a major step toward a peaceful coexistence. After telling the story, Mars begs Maniac to come to his home to meet his mother. Although Maniac is overjoyed by the news, he is cautious about letting others into his life. He has experienced so much heartache in such a short time and is content to stay aloof. Falling back to sleep, Maniac is awakened by Amanda Beale. Amanda demands Maniac return home to live with the Beales. Maniac agrees to go and walks to the Beale’s home knowing he now has everything he’s ever dreamed of.