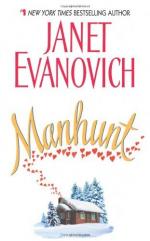 Janet Evanovich
This Study Guide consists of approximately 28 pages of chapter summaries, quotes, character analysis, themes, and more - everything you need to sharpen your knowledge of Manhunt.

This detailed literature summary also contains Topics for Discussion and a Free Quiz on Manhunt by Janet Evanovich.

Alexandra Scott leaves her New Jersey high life and executive's job to find a husband on the Alaskan frontier. Alex battles the climate and the fall out of a bad business deal as well as a man burnt by a former love to get what she wants in life. In the end her persistence wins out as she successfully lands the man she wants as a husband.

Although she doesn't know it Alex first meets Michael Casey when her dog Bruno jumps off a boat ramp in Juneau. They meet again at Alex's cabin in Alaska. Casey is Alex's closest neighbor. She sees him as highly attractive but not marriage material. Casey helps Alex make her cabin livable as well as improving the hunting and fishing store she has also purchased. During the time they spend together the two become very close and very aware of the attraction between them. Both Alex and Casey, however, keep each other at a distance.

One night after the two have dinner together the two make love and Alex believes this will be the start of a relationship. The next morning, however, Casey is curt and tense. Several weeks later the same thing happens. The morning after Casey announces he is taking a personal trip and will be away for a week. Alex questions Andy and discovers Casey has gone to visit his son from another marriage. It is at this point that Alex realizes Casey has been pushing her away because he is afraid of being hurt again. She also decides that she is the one who should be his next wife.

Throughout the story Casey and Alex work together and against each other in a way that is humorous and light-hearted. In the end Casey buys Harry a plane ticket back to Alaska in an attempt to run Alex away for good. It is only when Casey believes he has really succeeded in running Alex away that he breaks down and asks her to marry him.

More summaries and resources for teaching or studying Manhunt.