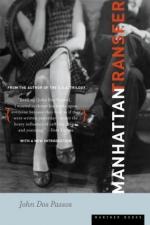 John Dos Passos
This Study Guide consists of approximately 58 pages of chapter summaries, quotes, character analysis, themes, and more - everything you need to sharpen your knowledge of Manhattan Transfer.

This detailed literature summary also contains Topics for Discussion and a Free Quiz on Manhattan Transfer by John Dos Passos.

Manhattan Transfer is a story about New York City from the turn of the 19th to the 20th century up to the start of The Great Depression. Ellen Thatcher and Jimmy Herf grow up in the city during the same time. Ellen has her hard-working father, Ed, who provides for her as best he can after his wife dies. Jimmy's mother dies when he is a young boy, leaving him parentless during his childhood. Ellen has a reoccurring pattern of marriage and divorce, while Jimmy cannot find his true path as a writer in the city. They have a brief marriage that produces one son, Martin. Ellen continues in her cycle of marriage and divorce, while Jimmy breaks free of the city.

Many other lives play out around the two central characters. Bud Korpening tries to live in the city, but nothing works out for him. He ends up committing suicide at a young age. Congo becomes rich as a bootlegger during Prohibition. His friend Emile marries an established businesswoman. George Baldwin wins a hefty settlement for Gus McNeal, and both men become political powers. John Oglethorpe marries Ellen and promotes her acting career on Broadway. Businessmen fail, and working people turn to crime while unemployed. World War I starts and ends. Prohibition begins, and The Great Depression follows.

While humanity lives its history, New York City becomes a metropolis. It transforms from a thriving 19th century city to a gigantic place with skyscrapers, subways and automobiles. Broadway and Wall Street become the centers of theater and finance. Individual lives ebb and flow like corpuscles in the city's lifeblood stream, and the city accepts or rejects them without emotion.

More summaries and resources for teaching or studying Manhattan Transfer.