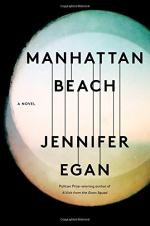 Related Topics
A Visit from the Goon Squad
The Candy House

Jennifer Egan
This Study Guide consists of approximately 45 pages of chapter summaries, quotes, character analysis, themes, and more - everything you need to sharpen your knowledge of Manhattan Beach.

The following version of this book was used to create this study guide: Egan, Jennifer. Manhattan Beach. Scribner, 2017.

The novel opens in New York City in 1934, five years after the American stock market crash. Eleven-year-old Anna Kerrigan accompanied her father, a union lackey named Eddie Kerrigan, to a business meeting at the Manhattan Beach home of a man named Dexter Styles -- a meeting that proved to be fateful for all three characters.

Eight years later, World War II was on. With so many American men fighting overseas, Anna was among the first wave of women to hold jobs at the Brooklyn Naval Yard. Her father had disappeared without a trace five years earlier. Dexter, we learn, was a boss in an organized criminal syndicate and owned a substantial number of nightclubs. He and Anna met at one of his nightclubs, Moonshine, one evening, and although Anna remembered him from the trip with her father when she was a girl, Dexter did not recognize her. Sensing that Dexter might know something about what happened to her father, Anna introduced herself to him as Anna Feeney, rather than Kerrigan. They met again later at the naval yard, and Dexter agreed to drive Anna and her younger disabled sister Lydia to the beach. When she saw the ocean for the first time, Lydia spoke intelligibly for the first time in years. She died a few weeks later.

Although her original job at the naval yard was to measure ship parts, Anna decided she wanted to become a diver, repairing battleships underwater. Undergoing the first tests for diving trainees, she met with a lot of resistance as the first woman to train for the job. Against all efforts to thwart her, she became the Brooklyn Naval Yard's first female diver.

Meanwhile, Dexter grew increasingly dissatisfied with his organized crime dealings, striving to join the "legitimate" business world in which his father-in-law, Arthur Berringer, operated. Toward this end, he made a business proposal to the syndicate's head, Mr. Q: that they launder the syndicate's money through war bonds. Mr. Q rejected the proposal.

Dexter and Anna met again at Mooshine, and they left and spent a passionate evening together. The next morning, Anna revealed that her father was Eddie Kerrigan, and she asked Dexter what happened to him. Dexter refused to answer her.

We learn that Eddie Kerrigan had been sailing for the past five years with the U.S. merchant marine. Five weeks before Anna's revelation to Dexter, he had departed on a voyage for Russia aboard a ship called the Elizabeth Seaman.

Meanwhile, Anna continued to dive at the naval yard. Dexter made a business proposal to his father-in-law similar to the one he made to Mr. Q: that he bring his "legitimate" assets to Arthur Berringer's bank. Like Mr. Q, Arthur rejected Dexter's proposal.

Dexter met Anna at the naval yard and told her that her father was dead. He offered to help her dive for his body in New York Harbor. We learn that the business meeting between Eddie and Dexter in the book's first chapter led to Dexter hiring Eddie to be his "ombudsman" -- traveling to his nightclubs, blending into the scene, and giving Dexter reports. However, Eddie later informed on the criminal syndicate's activities to law enforcement, in an act of revenge for the syndicate's murder of his childhood friend John Dunellen.

Dexter took Anna to dive for her father's body, eventually joining her underwater. They did not find a body, but they did find a mass of chains and Eddie's pocket watch, which Anna took to mean her father was dead. Later, we learn that Eddie had faked his own poisoning death and swam free after the syndicate dumped his body in the harbor. After his escape, he decided to abandon his family and join the merchant marine.

After his dive with Anna, Dexter was murdered by a member of the syndicate -- the reason being, it is implied, for his business proposal to Arthur Berringer. It is implied that both Arthur and Mr. Q sanctioned the murder. Shortly after Anna read the news of Dexter's death in the newspaper, she discovered she was pregnant with his child.

The Elizabeth Seaman was torpedoed by an enemy U-boat, and Eddie and the remaining crew members attempted to survive in lifeboats for 21 days.

Anna decided to keep her baby. She received a letter from Eddie postmarked from San Francisco, letting her know that he had been rescued at sea. With her aunt Brianne, Anna decided to move to California to have the baby, pretending to be a war widow and working as a diver at the Mare Island Shipyard. As the novel concludes, she and Eddie had begun to renew their relationship.

More summaries and resources for teaching or studying Manhattan Beach.