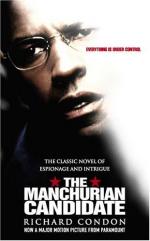 Richard Condon
This Study Guide consists of approximately 33 pages of chapter summaries, quotes, character analysis, themes, and more - everything you need to sharpen your knowledge of The Manchurian Candidate.

This detailed literature summary also contains Topics for Discussion on The Manchurian Candidate by Richard Condon.

“The Manchurian Candidate” revolves around the life of Raymond Shaw, a veteran American sergeant who served in the Korean War. During the War, Shaw's unit was ambushed by Soviet agents, and the men were taken to a secret Soviet psychological research facility. Raymond was chosen to be trained as a sleeper assassin, due to his socially withdrawn demeanor, intense hatred toward his family, and excellent marksmanship. Programmed to obey any orders he hears after seeing the queen of diamonds during a game of solitaire, Raymond brutally kills two of the men in his unit at the research facility while the rest of his men watch. The rest of the unit, however, is also brainwashed into believing that Raymond single-handedly saved them during an enemy attack. When the men return home and relay this fake story, Raymond is awarded the prestigious Medal of Honor.

Through other flashbacks, the reader learns of Shaw's upbringing. His mother, Eleanor Shaw, who functions as his step-father, Johnny Iselin's political handler during the action of the novel, divorced Raymond's father to better position herself as a political wife. She also deviously broke Raymond up from his childhood love, Josie Jordan, telling the family he was deranged and homosexual, because she came from a political family from the other party and Eleanor could not allow Raymond to be influenced by philosophical Communists.

The action of this political thriller begins after the events at the research facility, when Raymond is on his way to Washington to receive his Medal of Honor. Back in the civilian world, Raymond takes a job as an assistant/janitor/do-it-all for a powerful political columnist in New York. His former captain from Korea, Ben Marco, moves in with him and begins to experience nightmares about what went on at the research facility in Korea. Raymond's former handlers take him in for testing to ensure his control mechanisms are still in place, and decide to have him kill his boss as a test, landing Raymond with the columnist’s job.

Marco's nightmares grow worse, forcing him into medical leave, and he confronts Raymond about his dreams after hearing that another member of their unit is having the exact same nightmare. Raymond and Marco decide there must be some truth to the dreams and set out to uncover the truth, and Marco's girlfriend connects him to an FBI agent who decides to help them investigate. When Marco and Raymond meet the FBI agent, someone unknowingly tells Raymond to play solitaire and he follows the suggestion of a story he hears while under the influence of his training and jumps in the reservoir in Central Park.

Meanwhile, Johnny angles into a powerful political position by claiming there are Communists in the Department of Defense. After declaring he has a list of their names at a major press conference, he becomes a celebrity and the head of a new committee set to seek out spies and counter-intelligence agents. Eleanor goes to Europe on a diplomatic tour, bringing Raymond along to cover the political scene for his paper, but only incenses the continent against America. She insists various European officials are Communists and the U.S. government withdraws their support of her, doing exactly as she intends, making it look as though people in the American government support Communists.

Raymond's childhood love, Josie, returns after the death of her Argentine husband and the two make amends, setting right the misinformation Eleanor used to break the two apart. During a party celebrating Josie's return, the two make love and decide to elope. After marrying in Puerto Rico and honeymooning on a cruise, they return and move in with Josie's family, but Eleanor finds him. They program Raymond to kill Senator Jordan, Josie's father, and any witnesses, and Raymond ends up shooting Josie when she walks in on him in the act. Johnny publicly uses the Senator's death as evidence of Community activity in the U.S. and to further promote his own power and goals.

Eleanor gives Raymond his final assignment: to kill the presidential nominee, wounding Johnny in the process, so it looks like the Communists tried to take him out. During the party convention, Eleanor and Johnny go through a lot of political angling to land him the vice presidential nomination, backstabbing several supposed allies in the process to ensure their success. Meanwhile, Marco, having learned how Raymond's programming works, gets Raymond to explain everything that has happened and reprograms Raymond with a deck full of queen of diamond cards. Marco then stalls the FBI forces tracking Raymond so he can complete the new mission. At the convention, Marco watches from the floor while the FBI struggle to reach Raymond, but he fires before they can make it. He shoots Johnny and his mother. Marco then goes to Raymond, allows him to remember that he has killed Josie, and Raymond kills himself in grief.

More summaries and resources for teaching or studying The Manchurian Candidate.