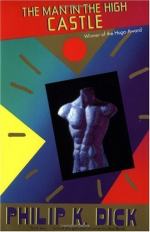 The Man in the High Castle Setting & Symbolism

I Ching, the oracle

It is traditional for Japanese to refer to the oracle when they question the direction of their lives. This tradition was taken from the Chinese and has spread among the people living in the PSA, including Frank and Juliana Frink. Juliana also learns that Abendsen consulted the oracle while writing his controversial book.

"The Grasshopper Lies Heavy" is a book written by Hawthorne Abendsen that speaks of a fictional world in which the Allies won the war. This book is banned in the German-held territories and is the reason why a German assassin is sent to kill Abendsen.

There is no television, so citizens of the former United States get all their news and entertainment from the radio.

Juliana makes her living teaching Judo at a gym in Colorado.

The Man in the High Castle from BookRags. (c)2023 BookRags, Inc. All rights reserved.