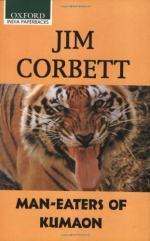 Jim Corbett (hunter)
This Study Guide consists of approximately 28 pages of chapter summaries, quotes, character analysis, themes, and more - everything you need to sharpen your knowledge of Man-eaters of Kumaon.

This detailed literature summary also contains Topics for Discussion and a Free Quiz on Man-eaters of Kumaon by Jim Corbett (hunter).

The Man-Eaters of Kumaon is the story of Colonel (then Major) Edward James Corbett (1875-1955), who is a famous soldier in the British Indian Army, and an excellent hunter and conservationist. Corbett's greatest claim to fame is keeping the Kumaon area of India safe from man-eating tigers. Corbett notes in his introduction to the book that tigers do not naturally eat human flesh. Instead, they only begin to eat humans through some accident, usually through a wound from a hunter, or an inability to catch their own game, such as broken teeth from old age. It is Corbett's job to hunt the tigers down, which is often a very difficult task. It involves not only risking his life, but of putting himself through grueling conditions, such as making platforms in trees known as machans and keeping watch alone with his shotgun for sometimes twelve and even eighteen hours.

Corbett hunts man-eaters from 1907 to 1938; he documents killing nineteen tigers and fourteen leopards, all of whom are man-eaters. All together, these animals kill twelve hundred human beings, including women and children. Since tigers will often hunt those who stalk them, Corbett hunts alone or with his trusty guard dog Robin. In part because he hunts alone, no characters but Robin have a prominent role in the book. Corbett rarely mentions family and only occasionally mentions friends; most of his interactions are with local Kumaons.

The areas Corbett hunts in are today located in the Indian state of Uttarakhand; the town of Nainital is the capital of the state. Kumaon is the eastern of two administrative zones in Uttarakhand and Garhwal is the other. It is composed of a number of smaller districts, including Cahmpawat. All of Corbett's hunts occur in either Kumaon or Garhwal. In the book, Corbett includes the stories of killing man-eaters in Champawat, Chowgarh, Powalgarh, Mohan, Kanda, Pipal and Thak.

Man-Eaters of Kumoan contains an author's note, nine chapters and a glossary full of Kumaon jargon. The author's note explains why and how tigers become man-eaters and the reason that Corbett has to kill them. Chapter 1 is the story of Corbett's first man-eater kill, the Champawat Man-Eater, Chapter 2 introduces Robin and their first hunts together, and Chapter 3 tells the story of the Chowgarh tigers and the hunt. Chapter 4 contains the hunt of the "Bachelor" of Powalgarh and Chapter 5 relates the hunt of the Mohan Man-Eater. Chapter 6 is a brief interlude concerning a fishing expedition. Chapters 7 and 8 are both brief and discuss the huntings of the Kanda Man-Eater and the Pipal Pani Tiger respectively. The final chapter describes Corbett's final hunt, where after weeks of tracking, he kills the Thak Man-Eater.