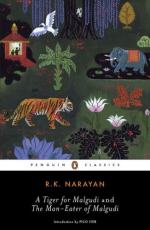 Related Topics
Swami and Friends
The Painter of Signs
Mr. Sampath: The Printer of Malgudi
A Tiger For Malgudi: A Novel
The Financial Expert

R. K. Narayan
This Study Guide consists of approximately 29 pages of chapter summaries, quotes, character analysis, themes, and more - everything you need to sharpen your knowledge of The Man-Eater of Malgudi.

The Man-Eater of Malgudi Summary & Study Guide includes comprehensive information and analysis to help you understand the book. This study guide contains the following sections:

This detailed literature summary also contains Topics for Discussion and a Free Quiz on The Man-Eater of Malgudi by R. K. Narayan.

Nataraj is the owner of a small press in Malgudi. He leads a normal life...until a bull-headed taxidermist named Vasu enters his shop. Vasu is at first a normal customer. He employs Nataraj to print some business cards. However, as the weeks pass, Vasu becomes more and more familiar with Nataraj's press, and those who frequent the press, a poet and a journalist, learn to avoid the bullying taxidermist.

Vasu talks Nataraj into lending him the apartment above the press, which Vasu immediately turns into a taxidermy operation, complete with dead animals, skins and solvents. The taxidermist goes on a hunting spree, poaching animals in the forests of Mempi, a village outside of Malgudi. After complaints about the taxidermist, Nataraj asks Vasu to leave the premises, an order that is irreverently ignored by the egotistical taxidermist, who appears to be above the law.

The poet completes a long poem, and the journalist and Nataraj plan a celebration. The planning goes smoothly until Nataraj learns that Vasu intends to kill the temple elephant during the celebration procession. Nataraj attempts to stop Vasu, sneaking into his apartment the night of the procession. He finds the taxidermist at the window...dead. An investigation follows, but no murderer is found. Nataraj's assistant discovers that Vasu was killed by his own hand, when he slapped a mosquito on his forehead.

More summaries and resources for teaching or studying The Man-Eater of Malgudi.

The Man-Eater of Malgudi from BookRags. (c)2022 BookRags, Inc. All rights reserved.