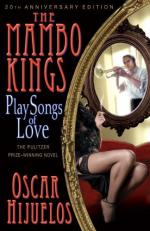 Oscar Hijuelos
This Study Guide consists of approximately 70 pages of chapter summaries, quotes, character analysis, themes, and more - everything you need to sharpen your knowledge of The Mambo Kings Play Songs of Love.

Explore the life and career of one of the musicians mentioned in the book, such as Celia Cruz, Pérez Prado, Tito Rodriguez or Machito, and report on the similarities and differences between that person's experiences and those of the fictitious Cesar Castillo.

In the 1940s and 1950s, Cuba was a popular resort destination for American vacationers. After doing some research, design a mock travel brochure for Havana in 1948, describing what tourists could expect to see there and what things cost in the actual prices of the time.

Watch the movie For Love or Country: The Arturo Sandoval Story, about the famed jazz trumpeter who left Cuba in 1990. Based on the movie, explain how the political world and the musical world have changed since the Castillo brothers in the novel emigrated in the 1940s.

A central point in the Castillo brothers'...

More summaries and resources for teaching or studying The Mambo Kings Play Songs of Love.

The Mambo Kings Play Songs of Love from Gale. ©2005-2006 Thomson Gale, a part of the Thomson Corporation. All rights reserved.