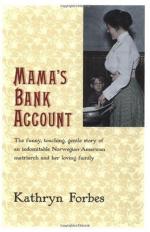 Kathryn Forbes
This Study Guide consists of approximately 33 pages of chapter summaries, quotes, character analysis, themes, and more - everything you need to sharpen your knowledge of Mama's Bank Account.

MAMA'S BANK ACCOUNT is the story of an immigrant Norwegian family living in San Francisco in the 1920s, told as a series of recollections from one of the daughters. Though they are poor and struggling, the mother of the family, Mama, never fails to get the family through difficulties with her simple values and wisdom.

The novel proceeds through various episodes in which the family encounters a problem. In one episode, the family must scrounge up enough money to put the oldest boy, Nels, through high school. While some children may have become insecure or worried about money and where it might come from in a poor family, Mama has the wisdom to create a fictional bank account in order to assuage such concerns. The children always felt secure, even in times of extreme poverty because they thought plenty of money existed for them elsewhere. This kind of deception (of the most positive and virtuous sort possible) is one of the many tactics Mama employs to protect her children from harm and make them happy.

Mama can also turn a negative into a positive. When a boarder passes a bad check and fails to pay his rent, Mama turns the situation into a positive one by noting that the boarder helped the children to read and left behind a treasure trove of classic books. When the family fails to do well moving to a chicken farm, Mama looks to the promise of the future in the opportunity to open a boarding house rather than the failure of the past.

Mama can also be very resourceful and ingenious. When a nurse refuses to let Mama see her sick child in the hospital, Mama disguises herself as a janitor, mopping the floor so she can pass the nurses' station undetected. And when Mama doesn't have quite enough for an expensive surgeon to perform a crucial operation for her husband, Papa, Mama promises that she can make up the money difference by having a carpenter do some home improvement on the surgeon's house for free. That carpenter happens to be Papa, so the surgeon better do a good job!

Overall, perhaps, most striking and heartfelt are recollections of Mama's self-sacrifice. She continually avoids buying a fur coat to keep her warm because the money might be better spent on another member of the family. She sells her mother's treasured heirloom in order to buy a graduation present for her daughter. And she dares to go flying in an airplane, just to see if it is safe for Papa to go flying.