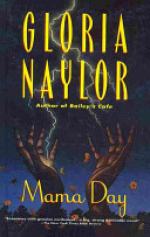 Gloria Naylor
This Study Guide consists of approximately 38 pages of chapter summaries, quotes, character analysis, themes, and more - everything you need to sharpen your knowledge of Mama Day.

The bridge is the only way on or off the island. When the bridge is destroyed, the island is cut off from the rest of the world. Metaphorically, Cocoa is also a bridge: between New York and Willow Springs, between Black and White, between the lofty language of her educated husband and the homespun dialect of the folks at home. When the storm hits, both bridges are damaged, and can only be repaired with hard work and sacrifice.

After the storm, Cocoa moves to Charleston to escape the memories of New York, and to be closer to Willow Springs. She meets and marries her second husband there, and raises two children, the oldest of whom she names George.

Chevy’s Pass is the location of Bascombe Wade’s gravestone. He is buried in a separate location, which symbolizes his unclear relationship to the...

More summaries and resources for teaching or studying Mama Day.