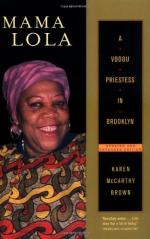 Karen McCarthy Brown
This Study Guide consists of approximately 36 pages of chapter summaries, quotes, character analysis, themes, and more - everything you need to sharpen your knowledge of Mama Lola.

This detailed literature summary also contains Topics for Discussion and a Free Quiz on Mama Lola: A Vodou Priestess in Brooklyn by Karen McCarthy Brown.

This book, Mama Lola, A Vodou Priestess in Brooklyn, is an exploration into one woman's life and family heritage, and how she comes into the role of a healer and 'manbo' within the Vodou religion. The story begins with Mama Lola's great grandfather and winds its way through the various generations into the story of Alourdes (a.k.a. Mama Lola) and her ministry in Brooklyn, New York. Like many who practice Vodou, Alourdes is born in Haiti, and hers is a life wrought with peril and poverty. Mama Lola gives birth to her first child at the age of fourteen, and she soon learns that she must do whatever it takes to survive. When Mama Lola is in her twenties, she is offered the opportunity to come to America. She eagerly embraces the chance, and through the will of the spirits, begins her practice in Brooklyn, New York.

Karen McCarthy Brown meets Mama Lola in the late seventies, and the subsequent friendship between the two lasts several years. McCarthy Brown immerses herself into the world of Haitian Vodou, under the tutelage of Mama Lola, marrying two of the Vodou spirits and eventually enduring the initiation rituals of a priestess. McCarthy Brown documents the life of Alourdes and her daughter Maggie by literally becoming a part of their extended Vodou family. She learns how Vodou operates, who the spirits are and what it takes to appease them. Also, and of most importance, she learns about the 'why' of Vodou, and how it is a religion of and for the people.

It becomes apparent that Alourdes's ministry is one of healing; of binding and maintaining the relationships of her extended earthly family, as well as those of her spirit family. The spirits in this book, as in the culture of Vodou, are alive and thriving and very much a part of the drama. Indeed, the life of a Vodou manbo is a trying and selfless existence, where often eight months out of the year an elaborate and expensive birthday party must be thrown for this or that spirit. To neglect these rituals is to ask the spirits not to work for you, and Alourdes's ministry, livelihood and heritage depends upon the work of the spirits.

More summaries and resources for teaching or studying Mama Lola: A Vodou Priestess in Brooklyn.