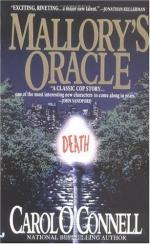 Carol O'Connell
This Study Guide consists of approximately 30 pages of chapter summaries, quotes, character analysis, themes, and more - everything you need to sharpen your knowledge of Mallory's Oracle.

This detailed literature summary also contains Topics for Discussion and a Free Quiz on Mallory's Oracle by Carol O'Connell.

"Mallory's Oracle" by Carol O'Connell is a work of fiction in the murder mystery genre. The main character in the book is New York police officer Kathleen Mallory. Mallory grows up on the city streets until the age of ten when she is arrested and then adopted by Louis Markowitz, a sterling cop in the NYPD. Mallory is a hard case from day one and never softens. However, through the love and care of the Markowitzes, hard work, and a gift for technology, Mallory becomes a computer expert in the department. Mallory does not often step outside the office but the death of Louis Markowitz prompts Mallory to dig into another aspect of police work. Mallory's ways are often abrupt and cold but she gets results through her actions, whether or not the action is appreciated. However, Mallory is recognized as an irreplaceable asset by the Chief of Detectives.

The only people that seem to be even relatively close to Mallory, aside from the Markowitzes who are now deceased, are Charles Butler and Sergeant Riker. Only those two men dare to touch Mallory in any way or refer to her by her Christian name. Mallory works under the watchful eye of Sergeant Riker, another good cop. Lieutenant Coffey is also a superior to Mallory. Although Coffey is Mallory's superior, he is equally in love with and afraid of her.

One of the main themes in "Mallory's Oracle" is New York City. The Gray-Lady Killer tends to target older and wealthy women that reside in Gramercy Park. The use of the exclusive Gramercy Park is important to the story as it is difficult for a killer to gain access to.

As a computer expert, Mallory makes frequent references to her work within the police department. The hierarchy of the police department seems to faze Mallory little and she usually does what she wants to do, even if it is not entirely legal. The illegal activity usually relates to methods used by Mallory to gain information or tap into the activities of various characters. The language regarding computer systems dates the work to a degree. However, unless one is intimately familiar with the current systems and applications, it would not be readily noticed.

The crux of the story is that a serial killer is targeting the elderly and wealthy ladies of Gramercy Park. Mallory becomes involved when her father, Louis Markowitz, is murdered. Nothing will stop Mallory from investigating and avenging her father's death.

Mallory's close friend Charles Butler, a psychologist, also becomes involved in the case. Also mixed up in the case as suspects are Margot Siddon, a would-be heiress who is mentally unstable, and Henry Cathery, an heir and an idiot-savant.

The elderly women are involved in a séance group headed by a scam artist named Redwing. The scam involves insider trading deals with information gained from the older women. Redwing passes on information in exchange for a cut of the profits.

The story ends in typical murder mystery fashion with the entire plot being laid out between the killer and the next victim. The killer is revealed and is shot.

Along the way Mallory learns new things about Markowitz, giving her an even clearer picture of the man she idolized.

It is clear almost from the very beginning of the story that Kathleen Mallory is a sociopath. A sociopath will do or say anything to serve her own needs, despite the consequences. In fact, many sociopaths are unaware of consequences, no matter how severe. As a young girl, Mallory is a juvenile delinquent and exhibits combative behavior. Although Mallory is treated well by the Markowitzes, her combative and secretive nature never changes.

More summaries and resources for teaching or studying Mallory's Oracle.