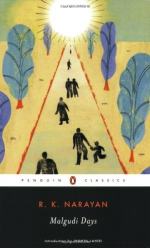 R. K. Narayan
This Study Guide consists of approximately 46 pages of chapter summaries, quotes, character analysis, themes, and more - everything you need to sharpen your knowledge of Malgudi Days.

This detailed literature summary also contains Topics for Discussion and a Free Quiz on Malgudi Days by R. K. Narayan.

The Astrologer cannot really read the stars, but is a good judge of character. He did not prepare for this line of work, but helps his clients take a look at their future.

Guru Nayakappears in An Astrologer's Day

Guru Nayak comes to the astrologer when all the lights are almost out and it is night. At first he is an unknown customer.

The Mailman, Thanappaappears in The Missing Mail

Thanappa is the mailman who gets deeply involved in the lives of the people that he delivers mail to, especially with Ramanujan and his family.

Ramanujanappears in The Missing Mail

Ramanujan is a man on Thanappa's mail route for many years. Ramanujan now wants to get his daughter married.

Dr. Ramanappears in The Doctor's Word

Dr. Raman is a very straight and to the point doctor. He tells patients and their family if he thinks the patient will die or has a chance.

Gopalappears in The Doctor's Word

Govind Singh works for a long time as a gatekeeper or security guard at a large firm. When he retires, he gets a small pension and develops a hobby of making clay and sawdust miniature models.

The blind man, the blind beggarappears in The Blind Dog

The blind man is a beggar who is brought out to beg everyday by an old woman. He becomes friendly with a dog that helps him, but that he abuses.

The Dog, Tigerappears in The Blind Dog

The dog is a friendly dog who roams wild by the market, until the blind man befriends it. It gets pleasure in helping the blind man, but then is subjected to a difficult daily routine

Rajam Iyer is a Tamil speaking member of the Brahmin caste. He is riding on a train and becomes disturbed by one of the passengers that comes onto the train.

The Newcomer who gets on the train is a disturbing man and a bully. He makes a man who is sleeping move and provokes Mr. Rajam Iyer with his disturbing speeches.

the Talkative Manappears in the Tiger's Paw

The Talkative man is a fertilizer salesman who goes to far-flung villages in the jungle, as long as they can be reached by the railroad. He appears in the village of Koppal, a place near the jungles and tigers.

Iswaren is a student who has failed his Intermediate examination many times since he was a boy. He has just taken it again, in one last try.

the Sculptor, Somaappears in Such Perfection

The sculptor Soma has made the perfect Nataraja, a statue of a god. He refuses to damage its perfection, despite the warning of the priest.

Swami is a young boy in the early grades of school. He is trying to avoid going to school and claims his teacher punishes the students.

Samuel is usually an easy going teacher of Swami, but is provoked by Swami's antics.

The Sadhu is a holy man who renounces the world. He comes to the talkative man's door and is rejected by him.

the Talkative Manappears in Engine Trouble

In this story, the Talkative Man wins a road engine, and then has problems deciding what to do with it.

Shantaappears in Forty-Five a Month

Shanta is a young girl who is just learning to read and write. She wants her father to take her to the movies.

Rao Venkat is Shanta's father. He is an overworked man who does clerical work in an office. He would like to pay more attention to his family but cannot.

Rama Raoappears in Out of Business

Rama Rao is a businessman, who suddenly finds himself unemployed and desperate for work.

Attila the dog is a fine-looking dog, but he is too friendly to be a good watch dog. Since his thoughts are shown, he can be considered a character.

Ranga is a coolie gang worker, or laborer, who turns to robbing houses at night.

Velan leaves his home village, Koppal, when his is 18 years old. He walks to the nearest town, Malgudi and gets a job as a gardener.

the Talkative Manappears in Lawley Road

The talkative man at this time is a news reporter on local affairs for a small newspaper. He decides to take the Frederick Lawley statue to his house.

Rajuappears in Trail of the Green Blazer

Raju is a known pickpocket. He is disguised as a peasant and looking for a target at the town fair.

Rama is a vendor of snacks on Market Road. He has a good business for a long time and he and his wife are very happy.

Kannan is a husband and father who uses the fact that his wife is on holiday to take off from work. He gathers coconut from trees.

Sambu is a young boy of about 12 or 14 years old. His father stars in a movie that he watches, but the father has recently died.

Ayah, Thayiappears in The Willing Slave

Ayah is a not very intelligent woman who has served a family as a nursemaid and babysitter for almost 20 years. Her real name is Thayi.

Sidda gets a job as a servant watching the girl Leela. He plays with her very nicely but then is accused of stealing her gold chain.

Ramuappears in Mother and Son

Ramu is an older teenager who has failed his school examination.

Ramu's Motherappears in Mother and Son

Ramu's mother is a widow who wants Ramu to marry his cousin.

The boy at the start of the story is about 11 or 12 years old. He lives with his father in a hut, then his Father abandons him.

The Father lives with the boy and they earn their leaving as snake charmers and also amusing people with a trained monkey. The Father runs off with a woman.

Mohan is a photographer who discovers Selvi when she is young and makes her a star and marries her. He runs her life.

Selvi is a woman who is devoted to the music that her mother taught her. She becomes submissive to Mohan.

Varma owns the Boardless Hotel and coffeeshop, where much gossip is exchanged. He wants to present a gift to Selvi, but is stopped by Mohan in the story, Selvi's husband. He is also a fixture in other stories, where idle young men go to chat and fantasize about the future.

the Son, Sambuappears in Second Opinion

Sambu is about 16 or 17 years old. He is an idler who spends his time at the Boardless Hotel café. He does not want an arranged marriage, but then hears that he mother may be dying.

The mother is a fairly energetic woman who has fainting spells. She sees a doctor who tells her that she is dying. She tries to arrange for her son to marry before her death.

the Shopkeeper, the Landlordappears in Cat Within

The Shopkeeper is also the landlord of the building where, in an addition to his shop, twenty families live. The people living there do not have electricity and live under overcrowded conditions.

the Exorcistappears in Cat Within

The exorcist earns his livelihood exorcising evil spirits that are believed to possess people and things.

Ranga is an illiterate knife sharpener of somewhere between 50 and 80 years old. His machine uses human muscle power, and his sense of time is vague.

the Hippieappears in God and the Cobbler

The hippie is an individual who tries to blend in with his environment. In a sense, he could be anyone from anywhere.

The cobbler is a poor old man who is trying to support himself, his wife and his grandchild, by fixing sandals and other shoes.

Ramanappears in The Hungry Boy

Raman is a young man who has a sign board business. He is upset because his girlfriend, who was his fiancée, has left him.

the Boyappears in The Hungry Boy

The Boy is at the town fair and has become separated from his family. All he is thinking of is having fun and eating and he goes off with Raman.

Rao is a rich man who is very old. In his younger days he is called Emden, signifying someone who is very tough and daring.

More summaries and resources for teaching or studying Malgudi Days.