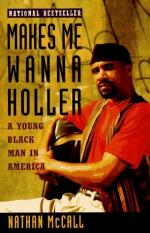 Nathan McCall
This Study Guide consists of approximately 29 pages of chapter summaries, quotes, character analysis, themes, and more - everything you need to sharpen your knowledge of Makes Me Wanna Holler.

This detailed literature summary also contains Topics for Discussion and a Free Quiz on Makes Me Wanna Holler: A Young Black Man in America by Nathan McCall.

The book opens with Nathan McCall and several of his friends, as teenagers, seeing a young white boy riding a bicycle and immediately attacking him, beating him severely. Each time McCall strikes the boy, he remembers some injustice against him, usually a slight based solely on race. When he realizes the boy isn't moving, he steps back and the group eventually stops beating the boy. McCall admits that for a moment he fears the young man dead, but then sees him breathing. Chapter two opens by stepping back in time to 1964 as McCall and his family arrive in a housing development called Cavalier Manor. The family has a new home among a development filled with new homes aimed at blacks. While the stated goal is to provide equal housing opportunities, the perceived goal is to keep the blacks confined to a specific neighborhood.

McCall grows up on the streets and early comes to despise his father's hard-working ethic and the fact that he seems to bow down before whites. He continually fights against a system that he believes destines young blacks - men and women - to failure. He soon finds himself involved in illegal activities of various kinds as a way to get money without having to bow himself before a white boss. When he and two friends rob a McDonalds, they are all caught and sentenced to jail. McCall, having gotten probation for a prior shooting of another black man, is sentenced to ten years. The message is clear - robbing the white manager of a fast food store is more serious than shooting and almost killing a black man.

While in prison, McCall takes stock of himself and those around him. When he's released, he has training in the printing field and quickly enrolls in college, taking up where he left off and struggling to finish a degree that enables him to go into journalism. He works for several papers, including the Washington Post.

Through it all, he fathers a child with his teenage girlfriend and has little connection or contact with the boy, who is named Monroe. He briefly marries and tries to include Islam in his life, but divorces and drops out of the religion. He then meets Debbie, a young professional, and they have two children though McCall feels that he was trapped into both fatherhood and marriage and the divorce is final just a few years later. He struggles to pay child support on all three children and to pay the mortgage on the home his wife retains. When he falls behind, he's briefly jailed.

Soon, Monroe wants to live with McCall and McCall finds himself worrying about Monroe, fearing that he will fall in with the wrong crowd or will simply be in the wrong place and will pay for that mistake with his life. He does what he can to protect his son, but comes to realize that he is no longer part of the street life and that he actually fears the power these destructive young black men hold in their hands. As McCall puts it, it makes him "wanna holler."

More summaries and resources for teaching or studying Makes Me Wanna Holler: A Young Black Man in America.