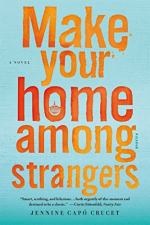 Make Your Home Among Strangers: A Novel Summary & Study Guide

Jennine Capó Crucet
This Study Guide consists of approximately 63 pages of chapter summaries, quotes, character analysis, themes, and more - everything you need to sharpen your knowledge of Make Your Home Among Strangers.

Make Your Home Among Strangers: A Novel Summary & Study Guide includes comprehensive information and analysis to help you understand the book. This study guide contains the following sections:

This detailed literature summary also contains Quotes and a Free Quiz on Make Your Home Among Strangers: A Novel by Jennine Capó Crucet.

The following version of this book was used to create this study guide: Crucet, Jennine Capó. Make Your Home Among Strangers. Macmillan, 2015.

Make Your Home Among Strangers is the story of a first generation Cuban-American student, Lizet Ramirez, as she manages the expectations of her family and her school in her first year of college. Her struggles are compounded by her mother, Lourdes', increasing involvement with the case of Ariel Hernandez, a young Cuban boy who has arrived in Miami after being rescued, and the way that that case further increases the spotlight on her as a minority student in a predominantly wealthy, white, educational institution.

Lizet commences telling her story from the present day, in which she is a manager of a research laboratory studying coral reefs, and amuses and shocks members of her lab by telling stories of her upbringing by the canals of Miami. The majority of her story, however, takes place in 1999-2000, in the first year of her degree at Rawlings College.

Lizet decides to fly home for Thanksgiving to surprise her mother and sister, but when she arrives they appear more annoyed that she did not tell them than happy to see her, and her mother is distracted by a story on the news about Ariel Hernandez, who has just arrived in Miami after being rescued by the coastguard when his mother and everyone else on board the raft died trying to get to America. Lourdes spends much of the weekend at a rally for Ariel, leaving Lizet at home with her sister, Leidy, and nephew, Dante, and when she is at home, they discuss Ariel's case. Lizet's questions about the evidence for the information Lourdes has heard at the rally create friction between her and her family.

Returning to school, Lizet must find out the results of an academic integrity hearing she is facing as a result of an allegation of plagiarism. The allegation is upheld, but her academic background at the "underserved" Hialeah Lakes high school is also taken into consideration, and Lizet is placed on academic probation. She makes use of the college's support services in order to avoid failing her courses, as that would mean taking remedial courses in the following semester and would impact on her financial aid package. Through a lot of hard work, she is able to pass all of her courses, but tells her family, who do not know about the integrity hearing, that her grades are better than those she actually received.

As the academic year progresses and she finds a routine in communicating with her family, Lizet finds herself performing better in her studies and is nominated for a paid summer internship in California. The professor nominating her is also the person hosting the internship, so her earlier academic performance is dismissed as unimportant. Before she is able to accept the position, however, the extent of her mother's involvement with the Ariel Hernandez case becomes apparent when Lizet sees her on national television, representing a group called Madres Para Justicia (Mothers for Justice). Lizet believes that Leidy and her boyfriend, Omar, have been hiding this from her, and that they should have done more to stop Lourdes from getting involved. She returns to Miami, calls her relationship off with Omar, and is equally unsuccessful at drawing her mother away from the group. During her visit, however, a raid is carried out on the Hernandez home, and Ariel is taken away, to be returned to his father in Cuba.

Initially, Lizet believes herself to be needed at home, to look after her family, and so she turns down the internship offer. Her professor, Dr. Kaufmann does not understand her reasoning, however, and holds the position open for her. After three weeks at home during the summer, looking after Dante and taking Lourdes to further protests, Lizet comes to the decision to pursue her own path and, despite disappointing her family, takes up the position in California.

Make Your Home Among Strangers: A Novel from BookRags. (c)2022 BookRags, Inc. All rights reserved.