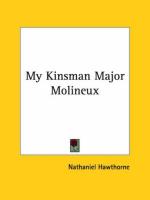 Nathaniel Hawthorne
This Study Guide consists of approximately 45 pages of chapter summaries, quotes, character analysis, themes, and more - everything you need to sharpen your knowledge of My Kinsman, Major Molineux.

"My Kinsman, Major Molineux" was first published in the 1832 issue of The Token, an annual collection of fiction, poetry, and essays generally bought as a Christmas present. It was one of four stories by Nathaniel Hawthorne in the issue, but like all of the pieces in the magazine, it did not carry the author's name. The story was not a favorite of the author's, and it drew no special attention from readers. It was not included in either of Hawthorne's first two collections of short stories, Twice- Told Tales (1842) and Mosses from an Old Manse (1846). Finally in 1851 it was published in the collection The Snow-Image and Other Twice-Told Tales. The story was not especially popular during Hawthorne's lifetime, being greatly overshadowed by the novels that the writer produced in the 1850s.

In the second half of the twentieth century, however, the story took on a new life. Appreciated for its gentle irony and its glimpse at life in colonial New England, "My Kinsman, Major Molineux" has been widely anthologized, and has become a staple of literature courses at the high school and college levels. The story of a young man from the country who goes to the city to find his relative is typical in many ways of early nineteenth century American literature. "My Kinsman, Major Molineux" is held as an example of the themes, styles, and techniques of the period, and as a sample of the talents of one of America's most important writers.

More summaries and resources for teaching or studying My Kinsman, Major Molineux.

My Kinsman, Major Molineux from Gale. ©2005-2006 Thomson Gale, a part of the Thomson Corporation. All rights reserved.