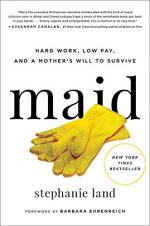 The Homeless Shelter is where Stephanie begins her journey. It represents the hardest, lowest point in her life, from which she will emerge and move away throughout the course of the book. It demonstrates the severity and depths of her poverty, as well as her reliance on government systems and the fact that she has no family or friends to whom she can turn for help. The homeless shelter is not only symbolic of Stephanie's poverty, it also quite literally demonstrates the fact that she has no place to call her own in which she can establish a permanent home for her daughter. Houses of various kinds will appear throughout the book, particularly when Stephanie enters the diverse homes of her clients. As such, the homeless shelter where the story begins sharply contrasts those other examples of home.

Stephanie's studio apartment is where...