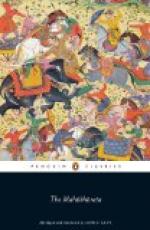 William Buck
This Study Guide consists of approximately 65 pages of chapter summaries, quotes, character analysis, themes, and more - everything you need to sharpen your knowledge of Mahabharata.

The Mahabharata is the great national epic poem of India (offically known as "Bharat"). Comprising one hundred thousand stanzas of verse divided into eighteen books, or parvas, the poem is the largest single literary work in existence. Originally composed in the ancient language of Sanskrit sometime between 400 BC and 400 AD, it is set in a legendary era thought to correspond to the period of Indian culture and history in approximately the tenth century BC. Its main subject is a bloody feud between two branches of the ruling family of the northern Indian kingdom of Kurujangala, the Pandavas and the Kauravas. Their conflict culminates in an epic eighteen-day battle and the annihilation of nearly all those involved in the war, except the victors, the five Pandava brothers—Yudhishthira, Bhima, Arjuna, Nakula, and Sahadeva—and a handful of others.

The poem's theme focuses on the Hindu concept ofdharma, or sacred duty. In essence, the epic story represents an extended exploration of the responsibilities set forth by the code of dharma. In addition to recounting a heroic tale, the Mahabharata contains a collection of writings on a broad spectrum of human learning, including ethics, law, philosophy, history, geography, genealogy, and religion. It also features a number of legends, moral stories, and local tales all woven into an elaborate narrative.

In the rest of the world, the poem is largely recognized for several of these exotic tales and for the BhagavadGita, which encapsulates many of the basic tenets of Hinduism. In India, the Mahabharata is considered one of the finest works on Hindu culture, and is widely read and studied. In addition, it continues to provide inspiration to new generations of Indian writers and artists, and is perceived as the nation's most valued classical work of literature. The encyclopedic character and cultural importance of the Mahabharata are characterized in this statement from the work:' "That which is found in these pages may be found elsewhere, but what is not in these pages exists nowhere."

More summaries and resources for teaching or studying Mahabharata.

Mahabharata from Gale. ©2005-2006 Thomson Gale, a part of the Thomson Corporation. All rights reserved.