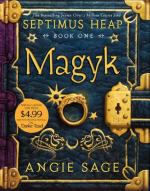 This detailed literature summary also contains Topics for Discussion and a Free Quiz on Magyk by Angie Sage.

Jenna is about to celebrate her tenth birthday with her parents, Sarah and Silas Heap, and her six brothers. She lives in a castle where magic was once very important but has since been all but abolished and where most wizards are feared or shunned. Before the birthday celebration can begin, the Extraordinary Wizard, a woman named Marcia Overstrand, arrives at the Heap house. Silas and Sarah know Jenna is not their biological daughter but have never questioned her parentage. Marcia reveals that Jenna is the daughter of the deceased queen, has been recognized by an assassin, and is now in danger. Marcia's story is backed by Alther Mella, the ghost of a former Extraordinary Wizard who often visits both the Heap house and Marcia. Marcia and the Heaps prepare to escape the castle and Jenna goes with Marcia to the Wizard's Tower. There, they find a young guard, the same age as Jenna, collapsed and frozen near the tower entrance. They take him inside and warm him up.

The boy reveals he's a member of the Young Army and has no name. He is merely Boy 412. He knows nothing about his parentage and has been taught that wizards are bad. When the evil necromancer, DomDaniel, arrives at the Tower, Marcia, Jenna, the Boy, Silas, and Jenna's younger brother Nicko, escape through a rubbish chute. They end up at the home of Silas's aunt, Zelda, who is a white witch. Over time, Boy comes to trust the others and it soon becomes evident that he has incredible magical powers. When Silas learns one of his sons, Simon, is missing, he goes to join the search and soon discovers Simon had run away to get married.

Silas is still away when Marcia receives a bogus message saying Silas needs to meet with her. It's a trap and Marcia is taken captive by DomDaniel who takes Marcia's amulet and sets himself as Extraordinary Wizard. DomDaniel is intent on killing Jenna, heir to the throne of the kingdom, and discovers the location of Aunt Zelda's house.

Aunt Zelda sends Jenna, Boy, and Nicko through a secret tunnel to hide from DomDaniel. There, they discover a hidden Dragon Boat they'd all believed to be nothing more than legend. The Dragon Boat, which is part live dragon, immediately recognizes Jenna as the young queen and Boy as the Dragon Master. The Dragon sets out and takes the children onto the marsh which is flooded by DomDaniel's storm. Jenna instructs the Dragon to rescue Marcia, which the dragon does. The Brownies then take over the boat and apparently destroy everything - and everyone - on board.

The following day Jenna discovers DomDaniel's apprentice has survived and she urges Nicko to help get the young boy to the house. Once there, Marcia realizes it's really DomDaniel in disguise and she sends him back to the Dark regions. Boy 412 accepts that he's a magical being and accepts Marcia's invitation to become her apprentice. With that acceptance comes the opportunity to ask a favor of Marcia and he asks for his true family to be revealed to him. When Marcia calls on Sister Moon for that information, it's revealed that Boy 412 is the seventh son of Silas and Sarah. His name is Septimus Heap and he was kidnapped as an infant.