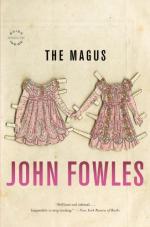 Get The Magus from Amazon.com
View the Study Pack
View the Lesson Plans
Study Guide
Order our The Magus Study Guide

John Fowles
This Study Guide consists of approximately 74 pages of chapter summaries, quotes, character analysis, themes, and more - everything you need to sharpen your knowledge of The Magus.

The Magus Summary & Study Guide includes comprehensive information and analysis to help you understand the book. This study guide contains the following sections:

This detailed literature summary also contains Literary Precedents and a Free Quiz on The Magus by John Fowles.

This thematically complex novel is equal parts psychological study and mystery thriller, using the narrative structure of the latter as a framework for the former. It tells the story of a self-centered young Briton, Nicholas Urfe, who, over the course of a magical summer in Greece, discovers sometimes frightening truths about himself and about the nature of life. Vivid imagery, dense language, and intriguingly layered characterizations thread, collide and intertwine throughout the narrative until the reader, like Nicholas, is unsure of what's true and what's fabricated by the characters. Only on the novel's very last page are protagonist and reader alike assured that the carefully woven mystery is over ... and the free-flowing mystery of life is now ready to begin.

The novel begins with Nicholas in England, where he embarks on what he believes will be one of his customary manipulative and dismissive affairs with women. The object of his "affections" this time is the vulnerable, sexually eager, and emotionally manipulative Alison, equal parts victim and user herself. As their affair develops, Nicholas also pursues an employment opportunity at a school in Greece, finding himself unexpectedly and inexplicably drawn to both the job and the country. Once he gets the job, he contacts his predecessor, who issues mysterious warnings about life on the island, but refuses to elaborate. As Nicholas prepares to go to the island, intrigued and excited, he engineers what he believes will be a clean break with Alison, but which she experiences as extremely painful.

Nicholas arrives in Greece, immediately falls in love with the landscape and in hate with the school and its students. One day while exploring the island (Phraxos) upon which the school is built, he discovers a mysterious villa and signs of human, particularly feminine, habitation. After investigations of the villa and its inhabitants prove inconclusive, he returns to the villa (Bourani) to continue his explorations, where he unexpectedly finds himself invited inside by the tenant, the intriguing, enigmatic Maurice Conchis.

Over the course of several visits, Conchis draws Nicholas into an increasingly, and for Nicholas troublingly, complex web of half truths, dramatic histories, romance, and tantalizing sexuality. Several mysterious events involve the appearance of a beautiful young woman named Lily, with whom Nicholas falls instantly, and deeply, in love. At first, Lily rebuffs his advances but as more and more layers of Conchis' half-truths come into play, she becomes more and more flirtatious, eventually confessing that she is not what she seems, that Conchis is playing games with Nicholas and that she is prepared to break Conchis' manipulative rules in order to be with him.

As Conchis tells Nicholas the dramatic story of his life, and as Nicholas falls more deeply in love with the inscrutable Lily, events at Conchis' home (Bourani) take increasingly bizarre turns, which finally result in Nicholas' being kidnapped, confronted by a exotically masked and costumed tribunal and told that he has been the subject of a complex psychological experiment. Conchis and Lily, as well as others Nicholas has encountered, turn out to have all played key parts in the experiment, and at its conclusion tempt Nicholas with the option of taking his revenge on them by punishing "Lily," the symbolic focus of his anger. Nicholas realizes that this is, in fact, the point of the experiment - to see whether he can transcend his feelings of anger and his desire for vengeance. He refuses to punish Lily and is then abandoned to find his way back to England.

Back in London, Nicholas attempts to track down both Alison and Conchis' allies, having little initial success in both but eventually discovering at least a degree of the truth. Eventually he's led into a reunion with Alison, who turns out to have been involved in Conchis' games and who, at first, refuses to get involved again with Nicholas. But as the result of everything that's happened to him, Nicholas has realized that it's time to live a life of personal integrity and attempts to force Alison to do the same. The novel concludes on the ambivalent note of Nicholas striding firmly into his future, unsure of whether Alison will join him on the way.

More summaries and resources for teaching or studying The Magus.

The Magus from Gale. ©2005-2006 Thomson Gale, a part of the Thomson Corporation. All rights reserved.