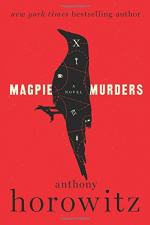 NOTE: The following version of the novel was used to create this study guide: Horowitz, Anthony. Magpie Murders. Harper, June 6, 2017.

A fatal accident, a gruesome murder, a drowning, a questionable suicide, and missing chapters from a manuscript are all connected in Magpie Murders by Anthony Horowitz. This murder story within a murder story includes the text of Magpie Murders, the final novel written by fictional author Alan Conway. When Cloverleaf Books Editor Susan Ryeland discovered that the final chapter to this novel was missing she began looking for it only to realize later that she had begun a journey that would change her entire life.

This novel is a frame story in which Susan addresses her reader in an introduction. She tells how she settled in to read the manuscript from Conway’s final Pünd novel with the anticipation of enjoying a good book. Speaking from the point in time after she finished the book, she gives the reader a warning that the book changed her life.

Horowitz next includes the first six chapters of the novel Magpie Murders, written by Conway. There had been an accidental death in the small English village of Saxon-on-Avon. As the villagers prepared to lay Mary Blakiston, the housekeeper at Pye Hall to rest, there was a feeling of unease about her death. The night of her funeral at Pye Hall, the home of Magnus Pye was broken into and a collection of silver stolen. Two weeks later, Magnus was murdered.

Pünd, a famous detective, had been contacted by Joy Sanderling, the fiancée of Mary’s son, because a rumor was circulating that Robert had killed his mother. Joy thought Pünd could put the rumors to rest but he told her there was nothing he could do. When he learned that Magnus was killed in the same house, he decided there was more to circumstances than the obvious and decided to lend his skills. The manuscript of Magpie Murders comes to an end just as Pünd is about to reveal the identity of the murderer.

At this point, the narration switches back to that of Susan. She was frustrated that the story was not complete. She later learned that Conway was dead; his death was presumed a suicide because her boss Charles Clover had received what appeared to be a suicide letter from him. During her hunt for the missing chapter of Conway’s book, Susan discovered there was much more to Conway’s death than just a suicide.

Her search led her to discover the missing part of the manuscript in Charles’s desk. He had killed Conway and used part of a letter from that manuscript as Conway’s suicide note. If the missing chapter were found, it would be suspected that Conway’s death was murder, not a suicide. When Charles discovered that Susan knew the truth about him and planned to tell the police what he had done he tried to kill her and destroy the final chapter of the manuscript in a fire.