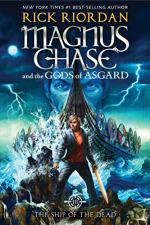 Related Topics
The Lightning Thief: The Graphic Novel
The Battle of the Labyrinth
The Last Olympian
The Lost Hero
The Red Pyramid
The Sea of Monsters
The Serpent's Shadow (2012 novel)
The Son of Neptune
The House of Hades
Percy Jackson and the Olympians: The Demigod Files
The Lightning Thief
The Demigod Diaries
The Titan's Curse
The Mark of Athena
The Blood of Olympus
Percy Jackson and the Lightning Thief
Magnus Chase and the Gods of Asgard, Book 2 The Hammer of Thor
The Trials of Apollo, Book 1: The Hidden Oracle
The Trials of Apollo Book Two The Dark Prophecy
9 From the Nine Worlds
The Burning Maze
The Trials of Apollo Book Three The Burning Maze
The Tyrant's Tomb
The Tower of Nero
Daughter of the Deep

Magnus Chase and the Gods of Asgard, Book 3 The Ship of the Dead Summary & Study Guide

Rick Riordan
This Study Guide consists of approximately 88 pages of chapter summaries, quotes, character analysis, themes, and more - everything you need to sharpen your knowledge of Magnus Chase and the Gods of Asgard, Book 3 The Ship of the Dead.

Magnus Chase and the Gods of Asgard, Book 3 The Ship of the Dead Summary & Study Guide Description

Magnus Chase and the Gods of Asgard, Book 3 The Ship of the Dead Summary & Study Guide includes comprehensive information and analysis to help you understand the book. This study guide contains the following sections:

This detailed literature summary also contains Quotes and a Free Quiz on Magnus Chase and the Gods of Asgard, Book 3 The Ship of the Dead by Rick Riordan.

The following version of this book was used to create the guide: Riordan, Rick. Magnus Chase and the Ship of the Dead. Disney Hyperion, 2017.

Magnus Chase has been given the difficult task of recapturing Loki and returning him to his bonds. With a crew of einherjar and a Valkyrie to help him, he sets sail on a magical boat given to him by his father Frey. The group must recapture Loki before his ship Naglfar sets sail at Midsummer, or else Loki will start Ragnarok, the final war between the gods and the giants. They sail from Boston, planning to meet up with Blitzen, a dwarf, and Hearthstone, an elf along the way.

As they approach their meeting spot, the boat is attacked by the Nine Giantesses of the Wave. Their boat is dragged under and they are taken to the hall of Aegir, lord of the sea. Samirah, a Valkyrie, claims guest rights and Aegir agrees to have dinner with them before he decides what to do with them. He warns them that he has promised his wife, Ran, vengeance on someone named Magnus Chase, so if any of their party is him he will have to kill them. They remain quiet about Magnus’s true identity and Aegir shows them the catch of the day, which turns out to be Blitzen and Hearthstone. Samirah is quick to tell Aegir that dwarf and elf are not halal, and Aegir frees them. As they sit to eat, one of Aegir’s daughters recognizes Magnus. They are able to convince Aegir not kill them by promising to challenge Loki to a flyting. Aegir leaves and the group has to fight the Nine Giantesses of the Wave to escape.

They are losing, and Magnus says a desperate prayer to his father Frey. His grandfather, Njord, hears the prayer and intervenes. Njord explains to Magnus that in order to win a flyting against Loki they will need Kvasir’s mead. He tells them their group must split up. Hearthstone and Blitzen should ascertain the location of the Bolverk’s whetstone which will be essential to getting past the mead’s guards and the rest should find Hrungnir the Giant, and get the location of the mead from him. Magnus objects to Hearthstone and Blitzen going off alone, and Njord promises that he will send Magnus to them when they are ready to actually take the stone.

Magnus, Alex, Mallory, Halfborn, TJ and Samirah sail to York, England to find Hrungnir. When they find him, he challenges them to tveirvigi, traditional doubles combat where each warrior has a second made out of clay. TJ agrees to fight the giant, and Alex makes the magical clay warrior that will be his second. They fight Hrugnir and his clay second and win. Just before he dies he tells them the location of the mead: Fläm, Norway.

Blitzen and Hearthstone return, saying they will need Magnus’s help to get the whetstone. Blitzen, Hearthstone, and Magnus go to Alfheim, and face off against Hearthstone’s father who has been turned into a dragon by a cursed ring. Magnus kills the dragon by stabbing a chink in his underbelly armor. Hearthstone then must decide whether or not to roast and eat the heart of his father. Roasting the heart will put his father’s spirit to rest, but if he eats the heart he will take on his father’s knowledge and memories. Hearthstone asks Magnus to hold the spit that the heart is on, and the two argue over whether or not Hearthstone should eat the heart. As they argue, Magnus accidentally drops the heart into the fire. He tries to catch it, but burns his fingers. He licks his fingers and ends up getting some blood into his mouth. From this, Magnus gains the ability to talk to animals.

They go to Fläm. When they get there Mallory sees the woman she blames for her death. Mallory, Magnus, and Samirah chase after the woman. When they catch up with her the woman reveals that she is the goddess Frigg and Mallory’s mother. Frigg offers them some advice on how to get the mead and gives them a magical walnut they can use to recapture Loki if they succeed in the flyting.

Mallory, Magnus, and Samirah follow Frigg’s directions to location of the mead, and find the meads guardians. The guardians are nine giant slaves, who have the task of cutting down their master’s wheat field using dull scythes. Mallory offers to sharpen their scythes for them with Bolverk’s whetstone, then tricks them into competing for ownership of the stone. She throws the stone into the air, and the giants jump up to catch it, forgetting that their scythes are now sharp. They accidentally kill each other with their scythes. They are able to get the mead, and set sail again.

They travel to the border of Niflheim and Jotunheim, where Loki has Naglfar docked. Traveling into the icy lands of Niflheim nearly kills them, but they are given refuge at Thunder Home, the hall of Skadi. Skadi gives them cider made from the apples of immortality, which gives them enough staying power to survive the frigid weather, then sends them on their way.

The group fights their way onto Naglfar, and Magnus challenges Loki to the flyting. In the beginning, Loki seems to be winning the flyting. He insults Magnus so badly that Magnus begins to shrink. Magnus tries to insult Loki back, but finds that cutting someone down is not his nature. He focuses instead on building up his team, and points out that Loki has no team. Loki shrinks, and they recapture him in the walnut. The group fights their way off Naglfar, and escape on the backs of water horses. They return Loki to the gods, who reward them for their bravery.

More summaries and resources for teaching or studying Magnus Chase and the Gods of Asgard, Book 3 The Ship of the Dead.

Magnus Chase and the Gods of Asgard, Book 3 The Ship of the Dead from BookRags. (c)2022 BookRags, Inc. All rights reserved.