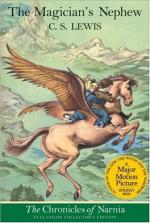 C. S. Lewis
This Study Guide consists of approximately 65 pages of chapter summaries, quotes, character analysis, themes, and more - everything you need to sharpen your knowledge of The Magician's Nephew.

Polly, Digory, and Cabby can all understand Aslan and the other animals. Why can't Uncle Andrew? What about his personality and actions make him unable to hear?

Describe the scene between the Witch and Digory in the garden on top of the hill. Why do you think he chose to return with the apple for Aslan instead of bringing it to his mother?

Discuss the religious parallels that Lewis uses within the story. Why do you think he incorporates these? Which one do you think is most effective in mimicking the Biblical account?

With which character in the story do you identify? Why do you think you are similar to this character?

Compare and contrast Uncle Andrew and Digory. How...

More summaries and resources for teaching or studying The Magician's Nephew.