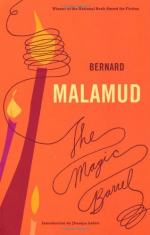 Introduction & Overview of The Magic Barrel

Bernard Malamud's short story, "The Magic Barrel," was first published in the Partisan Review in 1954, and reprinted in 1958 in Malamud's first volume of short fiction. This tale of a rabbinical student's misadventures with a marriage broker was quite well received in the 1950s, and Malamud's collection of short stories, The Magic Barrel, won the National Book Award for fiction in 1959.

As Malamud attained a reputation as a respected novelist in the 1960s and 1970s, his short stories were widely anthologized and attracted considerable attention from literary students and scholars. A writer in the Jewish-American tradition, Malamud wrote stories that explore issues and themes central to the Jewish community. A love story with a surprising outcome, "The Magic Barrel" traces a young man's struggle to come to terms with his identity and poses the religious question of how people—Jews and others— may come to love God. Is human love, the story asks, a necessary first step to loving God? Malamud's "The Magic Barrel" is a story remarkable for its economy, using just a few strokes to create compelling and complex characters.