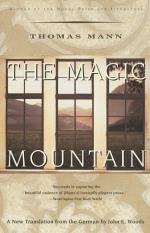 Thomas Mann
This Study Guide consists of approximately 50 pages of chapter summaries, quotes, character analysis, themes, and more - everything you need to sharpen your knowledge of The Magic Mountain.

During the years of World War I, Mann had come to the defense of what he perceived to be Germany's aristocratic, conservative, and romantic culture. Faced with the catastrophic outcome of the war and his nation's uncertain steps towards a democratic way of life, Mann quickly realized that Germany had to broaden its cultural base if it wanted to make a future for itself.

In a highly symbolic fashion, The Magic Mountain gives clear evidence of Mann's efforts to evaluate and mediate value conflicts without which neither artist nor society would be able to make a productive break with their stifling past. That no social consequences are drawn has in part to do with Mann's decision to locate his story in the years immediately preceding World War I.

More summaries and resources for teaching or studying The Magic Mountain.