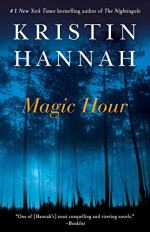 Kristin Hannah
This Study Guide consists of approximately 68 pages of chapter summaries, quotes, character analysis, themes, and more - everything you need to sharpen your knowledge of Magic Hour.

This detailed literature summary also contains Quotes and a Free Quiz on Magic Hour: A Novel by Kristin Hannah.

As the narrative opens Ellie, Rain Valley’s police chief, and two members of her team, Peanut and Cal, rush into town because of a report about a strange happening in the town’s center. When they arrive, they find a small child in a tree with a wolf. No one can determine how she managed to climb the tree, and they cannot convince her to come down. Finally, Ellie’s team gets food for that child, and after a period of time, the girl, who behaves like an animal and seems to have supernatural abilities, finally comes down and eats. Ellie captures her with a net and sedates her.

Afterwards, Ellie and her team take the child to the hospital. The local doctor, Max, comes to examine her. He discovers that the child suffers from malnutrition, and she shows signs of being tied up in the past.

Ellie’s goal is to find the child’s family. To accomplish that, she and her team check to see whether anyone has reported a child matching the girl’s description as missing. In addition, she calls her sister, Julia, a child psychiatrist, who lives in Los Angeles, and asks her to come to Rain Valley to help get the child to talk to them with the hope that the child will reveal her identity. Julia has recently had legal problems because of the murderous acts of one of her patients. While the court releases Julia from any legal responsibility, the scandal destroys her practice, so she agrees to go to Rain Valley. The trip is a bittersweet homecoming for her as she grew up there, but she did not enjoy her childhood.

Julia works with the child, gains her trust, and finally gets her to begin to speak even though the child still cannot tell Julia anything about her family. During the process, the child that Julia names Alice evolves as a person. At the same time, the relationship between Julia and Ellie blossoms and they grow as individuals. Julia and Max, who have both retreated from romantic love due to circumstances in their respective lives, admit that there is something special between them, and Ellie, who has two failed marriages, finally begins to appreciate Cal, who she grew up with and has always loved her.

As time goes on and no one claims Alice, Julia begins adoption procedures but encounters difficulties when the child’s biological father, George, arrives. It took him so long to appear because he had been accused of killing his wife and child (Alice) years ago when they disappeared.. He has just been released from prison because of a technicality. His appearance creates a threat because he wants to take Alice away from her new family and because he represents a threat to Ellie’s growth because of his good looks. Gorgeous men have attracted Ellie in the past. She chose them, over Cal, when she was in school and realized that she could attract them.

George and Julia go to court, both wanting custody of Alice. Julia gains temporary custody, but George can have supervised visits. As her job is to uphold the law, Ellie convinces Julia to let Alice return to where she came from before they found her in the tree because what they find there can either prove George’s guilt or innocence. Even though Julia worries about Alice’s mental health, she agrees and they discover that George is innocent.

After they exonerate George, the court returns Alice, who he calls Brittany, to him. However, Alice/Brittany regresses when she is with alone with him.. As a result, George brings her back to Julia because he realizes that she is the best parent for her. Even though George kisses Ellie during the custody battle, she realizes that Cal is the best man for her.

At the end of the narrative, Ellie and Cal get married. Alice starts school, and Max proposes to Julia who stays in Rain Valley. She plans to open a practice and work part-time. She attributes her renewed outlook on life to Alice’s appearance.

More summaries and resources for teaching or studying Magic Hour: A Novel.