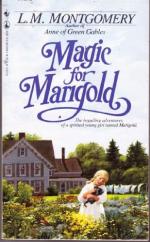 Lucy Maud Montgomery
This Study Guide consists of approximately 46 pages of chapter summaries, quotes, character analysis, themes, and more - everything you need to sharpen your knowledge of Magic for Marigold.

This novel by the author of the famous "Anne of Green Gables" series of books is the story of another spirited, independent girl who, over the course of the narrative's several years, grows into the beginnings of womanhood. Over time, as wealthy, nature-loving Marigold Lesley begins the struggle to discover and sustain her own sense of identity, she also learns important (and thematically relevant) lessons about being female, about the nature of imagination, and about religion and faith.

The story begins in the early days of Marigold's life, as the many members of her extended family gather, in Lesley family tradition, to decide what the newborn is to be called. The debate carries on for weeks, with no sign of resolution. At one point, however, the yet-unnamed baby falls dangerously ill, and much against the better judgment of most of the family, autocratic matriarch Old Grandmother calls in the area's first female doctor. The doctor prescribes treatment that eventually makes the baby well, and Old Grandmother decrees that in gratitude, the baby is to be given her name. Thus is the baby named Marigold.

The narrative then jumps ahead six years, and rejoins Marigold as she, along with the rest of the family, celebrates the birthday of Old Grandmother (family members include the regal Young Grandmother, Marigold's timid mother Lorraine, and the doctor who saved her life, married into the family and now called Aunt Marigold). Then follows a series of chapters in which Marigold encounters eccentric strangers (including the strong-willed princes Varvara and the mysterious peddler Abel), equally eccentric family members (including a seemingly endless parade of uncles and aunts), and a collection of cousins and friends who each bring change and challenge into Marigold's life. These include her deceptively perfect cousin Gwendolen, her once-pious friend Paula, and the God-hating orphan Bernice.

Running beneath and within all these encounters are references to Marigold's relationship to the mysterious Sylvia, eventually revealed to be an imaginary best friend who lives in the orchard at the back of the Lesley family property, Cloud of Cedars. There are attempts throughout the narrative to end the relationship between Marigold and Sylvia, but every time, those attempts result in profound unhappiness for Marigold leading, in turn, to a renewal of the friendship.

As Marigold matures, both important figures and important ideas move in and out of her life. In terms of the former, the most notable person to leave Marigold's life is Old Grandmother, who dies before reaching her goal of living to be a hundred but not before sharing a moment of deep connection with Marigold in the orchard that both of them love. In terms of the latter, the most formative idea Marigold has (or, that is, formative for a while), is the dream of becoming a missionary, but challenging encounters with people she tries to help result in her changing her mind.

The whole while, Marigold remains friends with Sylvia - that is, until Marigold begins to feel a tentative, almost timid interest in boys. Her first couple of relationships with the opposite sex don't go particularly well, and for a while she refuses to have anything more to do with the male gender. Eventually, however, her relationship with an attractive, sometimes kindred spirit named Budge leads her to realize that not only can spending time with a boy be enjoyable for itself, but it also helps her get more of an idea of what it's like to be a woman.

More summaries and resources for teaching or studying Magic for Marigold.