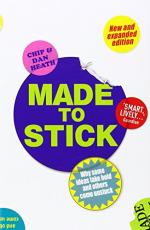 Made to Stick Summary & Study Guide

Chip Heath
This Study Guide consists of approximately 37 pages of chapter summaries, quotes, character analysis, themes, and more - everything you need to sharpen your knowledge of Made to Stick.

Made to Stick Summary & Study Guide includes comprehensive information and analysis to help you understand the book. This study guide contains the following sections:

This detailed literature summary also contains Topics for Discussion on Made to Stick by Chip Heath.

“Made to Stick – Why Some Ideas Survive and Others Die” by Chip Heath and Dan Heath is a book about finding, adhering to and conveying one’s “core issue.” The authors stress the importance of simple messaging based on an individual’s or group’s core issue. By simplifying the message and provide the fundamental purpose or value of a concept or organization, the target audience will be able to grasp it immediately.

Southwest Airlines’ core issue is its low fair. Everyone one in the organization is aware of this fundamental company value and are trained to work toward that goal. The message is simple and clear and therefore effective. James Carville was the national campaign manager for Bill Clinton’s 1992 presidential campaign. Carville, of course, was a huge supporter of Clinton but the candidate had a habit of talking too much and confounding the staff as to what the fundamental message of the campaign was. To dispel any misunderstandings, Carville took a white board one day and wrote, “It’s the economy, stupid.” The message was for the staff. It said much more than those few words. It fundamentally told the staff to ignore Clinton and focus on the economy. He had to stop Clinton from burying the lead.

The authors discuss effective elements of messaging once one’s core issue is determined. They describe how an element of surprise or the unexpected can be intriguing and draw the interest of target audiences. One professor started his lectures with a mystery that he revealed at the end of class. He noticed that students no longer left class early or lost interest. They wanted to find out the answer to the mystery.

Abstract appeals to students or potential customers are perfectly acceptable but they aren’t engaging. By providing concrete samples the concept comes alive and can make the important connection with the audience that is essential for buy-in. The messenger who delivers the message must be credible. Experts in the field and those with hands-on experience have credibility. Those learning about new concepts from someone they deem credible are more likely to trust the validity of the information.

Appealing to a person’s emotions is a proven way to get one’s message across as are anecdotal stories that everyone can relate to. When a nurse is certain that a newborn is having heart trouble in the neonatal intensive care unit of a hospital, she doesn’t trust the heart monitor that indicates his heart is fine. She listens for a heartbeat with her stethoscope but there is none. The heart monitor was malfunctioning. The baby was treated for his heart problem and lived. Others refer to relatable stories like this as a comparative technique.

More summaries and resources for teaching or studying Made to Stick.

Made to Stick from BookRags. (c)2022 BookRags, Inc. All rights reserved.