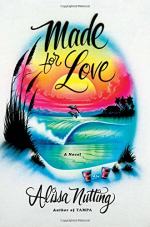 Made For Love Summary & Study Guide

Nutting, Alissa
This Study Guide consists of approximately 51 pages of chapter summaries, quotes, character analysis, themes, and more - everything you need to sharpen your knowledge of Made For Love.

Made For Love Summary & Study Guide includes comprehensive information and analysis to help you understand the book. This study guide contains the following sections:

This detailed literature summary also contains Quotes and a Free Quiz on Made For Love by Nutting, Alissa .

The following version of this book was used to create this study guide: Nutting, Alissa. Made for Love. HarperCollins, 2017.

In August of 2019, Hazel arrived at her elderly father’s trailer in a Florida retirement community, desperate for a safe haven from her tech mogul husband Byron Gogol. After nearly a decade of loveless marriage at the isolated Gogol company compound, Byron’s attempts to install a mind-reading chip in her brain had been the final tipping point that pushed her to flee. Hazel knew Byron would not let her escape easily, and suspected he might even have her killed if he could. However, her father was far from sympathetic. His new sex doll Diane had arrived only that morning, and his daughter’s presence would cramp his honeymoon with her. He begrudgingly agreed to let Hazel stay, but on the condition that she spend that first dangerous night out of the trailer.

On the street, Hazel began counting her regrets. She had met Byron when she was a young, hard-drinking, soon-to-be college dropout, and his life of luxury and fame had seemed too good to be true. She realized now that she had never truly loved him, nor he her, and that all the warning signs of his future callousness had been there at the start. She eventually found the Spotted Rose, a dive bar where she met a gruff, hard-looking man named Liver. Hazel drunkenly told him about Byron’s beautiful, intelligent assistant Fiffany, who had looked down on her inability to adjust being wealthy, and proceeded to drink until she could only stumble home. She was jarred awake in the morning by a video projection of Byron, who demanded they talk further and told her he had left a phone in a safe in the backyard. Hazel refused, frightened that Byron apparently now knew where she was but relieved she was still alive.

Meanwhile, about a year earlier, a handsome, heartless conman named Jasper had just fleeced his latest victim for $38,000. His M.O. was romancing lonely women until they willingly gave him money for invented needs, after which he dumped them. Feeling celebratory, he went for a swim in the ocean. He was feeling great until he was attacked by something in the water. It was a dolphin, possibly attempting to have sex with him. He fought it off and carried it towards the beach. The onlookers thought he was rescuing it and putting it back in the ocean. They were excitedly taking photos when he ran back to his motel.

Back in the future, Hazel was still having her own problems. After her encounter with Byron, her father had left for a medical appointment and asked her to put his sex doll Diane to bed. Curious, she had stuck her hand in the doll’s mouth and gotten stuck. She tried to dunk Diane in the bathtub, thinking the water would lubricate her arm, but a flash of bright light and pain suddenly struck her while she was still running the water. When she regained consciousness, the bathroom was flooded and she had dislocated her shoulder. Unable to bear the pain or escape, she took a handful of Percocet and fell asleep until her father found, extricated, and scolded her.

Afterward, Hazel called Byron to ask whether he was behind her blackout. He told her that he had in fact already implanted her with a memory-chip before she left the Gogol compound, and that she had experienced the side-effects of one of its downloads. From now on, every 24 hours it would send Byron all of her thoughts and experiences during the past day as well as her GPS location. Hazel despaired because this meant that her hopes of escape, however slim to begin with, were now futile. She decided to return to the Spotted Rose, where she once again met Liver. They went to his shack and talked about her problems, then had sex. When she woke next to him the next morning, Hazel had an idea to stop the next download. With Liver’s help, she climbed into Diane’s shipping box and put on a Gogol Sleep Helmet, hoping these would block the download. It was unsuccessful, and afterward Byron called Hazel to let her know that the Sleep Helmet’s external health monitoring ability had detected that her father had terminal cancer. Without the advanced care available at the Gogol Hub, he would almost certainly die, and it would be Hazel’s fault for not returning to Byron.

Now only a few months before Hazel’s timeline, Jasper had abandoned his life as a conman and spent nearly a year working as a janitor as the Oceanarium. He had fallen madly for a dolphin named Bella and made elaborate plans to kidnap her and keep her in his bathtub. He waited until late after work on night and snuck to the dolphin tank. However, his supervisor Tiny arrived on the scene before anything happened and fired him on the spot. Now in complete despair, Jasper went back to his apartment and was preparing to kill himself when he was interrupted by an ad for a new Gogol subsidiary called Biotech Medical, a company that claimed to treat even the most incurable illnesses.

Before deciding whether or not to return to Byron, Hazel confronted her father about why he had kept his cancer hidden. He told her he simply wanted to live out the rest of his days in peace with Diane and her new pall Roxy. Hazel was relieved that she would not have to go back to Byron out of daughterly duty, and threw herself into caring for her father. She was somewhat content, but when she went to find Liver, she found his shack was burnt down and replaced with a sign reading “property of Gogol Industries” (211). Hazel assumed Byron had had Liver killed and was wracked by guilt. Weeks passed as her father grew more and more ill. Hazel eventually stumbled on his dead body ensconced between his two dolls. She despaired when she realized that after Byron realized her father was dead, he would try to use other loved ones as pawns to manipulate her. No one she cared about was safe as long as she had the chip, so she took a bottle of her father’s pain pills and settled in to die next to him.

Jasper had not gone ahead with his own suicide attempt. Instead, he put all his money into a possible Biotech Medical cure. After an exhaustive intake procedure, he met Voda, the chain-smoking head of Biotech Medical. She told him she wanted to perform a dangerous, experimental surgery on him that might partially cure him of his dolphin fetish. He agreed, and when he woke up from the surgery, Voda asked to try having sex with him. Almost immediately Jasper’s mind was filled with sexual imagery of dolphins, but he was able to perform. Voda considered this a major success and asked him to come live with her. In addition to the change in his fetish, Jasper also felt an intense attraction to Voda and much more empathy in general. He lived with her for a few weeks, feeling increasingly intense remorse for having scammed so many women over the years. Eventually his crying jags got on Voda’s nerves, and she banished him to the backyard casita. After only a little while, Byron’s assistant Fiffany appeared to him and asked whether he might go inject a woman with a serum that would free her from a brain chip. Wanting to make up for his past misdeeds, Jasper agreed and drove to Florida. There he found Hazel nearly-dead. Liver also arrived on the scene just after him and took charge, making Hazel vomit and injecting her with the serum.

When Hazel recovered, they had to act quickly to escape detection by Byron. They all piled into Jasper’s van, together with the corpse and the sex dolls, and buried Hazel’s father at an isolated farm. Hazel said goodbye to Liver there, leaving him with the sex dolls, and drove further away with Jasper. At noon, Hazel was relieved when no download happened, and she asked Jasper to leave her in a small-town where she got a job in the kitchen of a diner. Living in a motel room, she was lonely and miserable. As months passed, she watched as Byron first reported her missing, then began dating Fiffany, and finally married his former assistant. Then, out of the blue, she saw a report that Byron had been killed by a malfunctioning Sleep Helmet. Hazel suspected Fiffany had tampered with it so that she could replace him as CEO, but she was simply happy to be free. Soon after, Jasper came to visit her at the diner, and they had a long heart-to-heart about their troubled former relationships. Finally, they decided to start over together.

More summaries and resources for teaching or studying Made For Love.

Made For Love from BookRags. (c)2022 BookRags, Inc. All rights reserved.